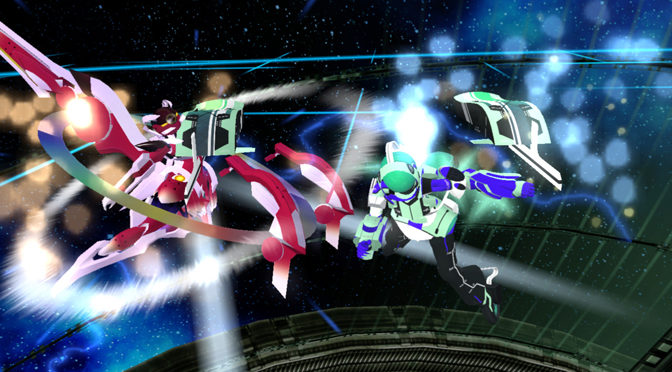 My time wasting this week comes courtesy of Degica. If that names sounds familiar, its because I’ve reviewed their games in the past. They mostly handle bringing shumps from Japan to the U.S. and other countries, but this time they had something a little different for me. That something is Senko no Ronde 2.

Senko no Ronde 2 isn’t a game that can easily fall into a single category. It’s one part shump and other part fighting game. If that sounds weird, it kind of is a little strange. The whole idea of the game is that two mechs, called Rounders, duke it out while weaving and dodging around each others attacks.

Players can defeat an opponent in the same way as other fighting games. This includes depleting health or having more health when time runs out. However, there is also another special aspect of the Senko no Ronde 2. When a Rounder runs out of health, it enters Vanish mode. At this point, taking one hit will destroy it. However, there’s a special ability that unlocks while in Vanish mode that we’ll talk about later.

Senko no Ronde 2 may not work in the same fashion as a normal fighting game, but that doesn’t mean there isn’t a lot of depth to it. Players have several different abilities that they can use in the game to try and outmatch their opponents. This includes several different types of shots, a shield, boost, melee attacks and more.

The very basics of Senko no Ronde 2 is that the left analog stick moves the Rounder and the A button fires the main shot. Each mech also has a secondary shot on the B button. These buttons also change to melee attacks when the player is in close range to an enemy Rounder.

The X button is for special abilities and each Rounder has their own unique one available to them. The Y button allows players to perform a shot cancel. This stops enemy shots from hitting the player. There’s also another special ability on the Left Bumper. This ability changes with each mech and players can also change these abilities out for different ones when choosing their character.

On top of all that I just mentioned, Senko no Ronde 2 also has a boost button tied to the Right Trigger. Boosting can change shots and easily move the player out of harm’s way. While remaining still, this same button generates a shield. The shield can’t absorb all types of shots, but it can block most. Activating the shield also changes how the player’s basic and secondary shots work.

Blocking with this shield and attacking an enemy’s shield also affect a special meter. Blocking reduces it and has the player dropping glowing orbs. The player making the attack can pick these orbs up to increase their own special gauge. When a special gauge reaches zero, the Rounder overheats and the player can’t bring up their shield or boost for a short period of time.

There’s also another version of Boss Mode that players can activate in Senko no Ronde 2, but only under certain conditions. This is called Final Boss Mode. To enter this mode, the player must activate Boss Mode while in the Vanish state. Doing so brings in an even more powerful version of the Boss armor and gives them more times to try and defeat the opponent. It’s a last ditch effort that can completely turn the tides of battle.

The addition of Final Boss Mode and the Vanish state add a little extra strategy to the game. For example, it may be best to hold off on activating Boss Mode until right before the enemy enters the Vanish state. This means they can’t enter Final Boss Mode and it makes them much easier to defeat. I’ve also just plainly held off putting enemies into Vanish to keep them from activating Final Boss Mode. Instead, I just focus on dodging their attacks and winning when time runs out. Players also only have so many uses of Boss Mode per fight so that they can’t just spam it.

Honestly, sometimes it feels like there’s a little too much to keep track of in Senko no Ronde 2. Constantly moving to dodge attacks and making attacks at the same time is already  complex. Add in the fact that almost every button has a second purpose and it becomes somewhat overwhelming.

Another slight flaw with Senko no Ronde 2 is that the combat feels a little clunky. The Rounders all feel like they are moving through molasses and it takes what should be fast-paced gameplay and makes it feel a little cumbersome. The melee attacks are also hit or miss. If you get an enemy caught in the opening attack, then you get a full combo off every time. However, melee attacks are hard to connect with and the AI will, more often than not, beat you to the punch.

Senko no Ronde 2 features several different modes for players to enjoy. There’s the basic Arcade mode, local and online multiplayer, as well as Score Attack and Practice modes. Each of these modes offer their own challenges and playing against a human is much more enjoyable than the AI, but that’s true for every fighting game.

There’s also a story mode in Senko no Ronde 2, but I can’t really recommend it. The story is told with lots of still images and text. Sure, there is voice acting, but it’s all in Japanese. I want to mention that I’m not at all against reading in games. My favorite genre is JRPGs and those are almost always giant text dumps.

The problem with Senko no Ronde 2’s story is that none of what’s happening really matters. It’s mostly just the characters sitting around and talking about events that happen off-screen. It’s actually really annoying and makes the story disjointed. Also, there are 14 characters in the game and it tries to give each of them the limelight. This splits the focus for the story way too much and leaves the player doing more reading than fighting. Based on my experience, players will spend roughly 75% of their time reading and only 25% of it actually playing the game while in story mode. It just isn’t worth it.

The visuals in Senko no Ronde 2 aren’t bad. This version of the game is basically a remake of the one that came out for the Xbox 360, so expect graphics from that console generation. I’ve also had a few issues with the framerate, which shouldn’t be a problem for a game packing these kinds of visuals.

The audio in Senko no Ronde 2 does its job, but that’s about it. There’s solid rock music to go with the battles and softer tunes for menus and other parts of the game with less action. The sound effects all comes across fine and I didn’t have any issue with one part of the volume overriding another.

When it comes to the voice acting in Senko no Ronde 2, I can’t really weigh in. I’m an anime fan and often watch series in Japanese, but with subtitles. I don’t have a strong understanding of the Japanese language and can’t really tell if these are good or bad voice actors. That’s more up Michael’s alley than mine.

Overall, Senko no Ronde 2 is an interesting experience. Mixing a fighting game with a shump is a neat idea, but I feel like the overall execution could have been a little better. It’s also a bit pricey at $40. Still, this is a fun game and I would recommend it to fans of shumps and fighting games.