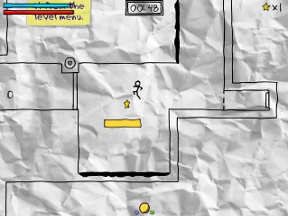 Please make your way to your seats! Class is about to start! Allright Time Wasters: let us begin our lesson today with the study of browser-based gaming.

Remember the good old days in middle school where the teacher would give an all important lecture and instead of you giving it your undivided attention you instead scribbled stick figures in your notebook? Well, the developers of Crumpled remember those days and they’ve brought our old doodles to life like we never could have.

Crumpled is a side-scrolling adventure game where a stick figure and a blob must run, jump, and solve puzzles together to reach their goals. Our stick figure friend (Stick from now on) is well versed in the ways of parkour and can run, jump, and slide all over the level. Our blob friend (ummm, let’s just stick with Blob) on the other hand is a shape shifter that uses his powers to change into various objects to help Stick overcome his obstacles.

The unique thing about these two is how they’re controlled. Stick is controlled with the keyboard and Blob constantly follows our mouse pointer and shape shifts with a simple click. These, combined with the ability to slow time and change the properties of Blob with different colored gels makes for incredibly challenging puzzles. The learning curve is a little steep and can be quite frustrating but once mastered the gameplay of Crumpled is really something to behold.

What about the graphics though?

Crumpled looks just like the name implies. The background is a crumpled up piece of notebook paper and all of the levels look like they were sketched by the hands of a sixth grader ignoring class. This is what really made me like Crumpled. I can’t even begin to count all the times I sat around in class (or detention) and drew adventures of stick figures to keep me entertained. From elaborate stories that felt epic beyond all belief to stick figures dueling to the death my imagination ran wild and Crumpled has ignited my memories with the flames of nostalgia.

The audio in Crumpled is incredibly appropriate for the game. Menus are filled with the sounds of children hustling and bustling in a classroom, which brings back lots of memories of waiting for class to start. Once in a level though the music turns to a happy go lucky guitar and the sounds of a gelatinous blob moving about. I really liked the guitar in Crumpled. It had such a simple beat and was very catchy.

Crumpled is a great way to waste time. With its nostalgia for a much simpler time it drew me in and then held me with complex gameplay, difficult puzzles and audio and visuals that fit its setting perfectly. Play Crumpled, enjoy it and then suggest it to your friends!

Crumpled runs and jumps its way to 4 GiN Gems out of 5!