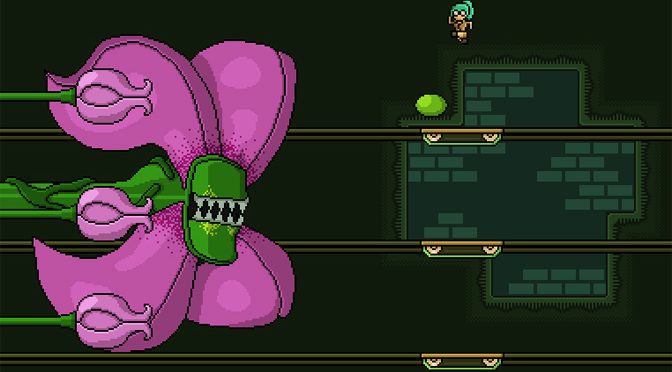 I’m keeping my promise from last week to step away from mobile games, but maybe only as a brief break. Instead, I’m looking at Labyrneath II. This is actually the sequel to another browser game I reviewed here just a few months ago. You can check out that review here, which I suggest as I will be referring back to the first game.

Starting off, it’s worth noting that the story of Labyrneath II picks up exactly where the first one left off. Our busty heroine has retrieved water from the fountain of youth and must now make it back home to her sickly father. However, before she can make it back to her plane, she’ll have to navigate a dangerous jungle filled with traps and challenges.

Labyrneath II drops the player right into the gameplay with a collection of platforming challenges. This includes all the basic obstacles, such as spike pits and other traps. Luckily for the player, the developer really has a great sense for physics. The game controls like a dream with just the right amount of float in the controls. It makes for some great platforming when the player doesn’t have to fight with the controls.

My review for the first Labyrneath had me making some slight complaints about the game’s difficulty. It was mostly suitable, but also sometimes came across as a little too easy. Labyrneath II fixes this by adding in some extra challenges that had me dying a few times here and there. The developer really got the difficulty down just right this time around.

There are also puzzles in Labyrneath II and they are a bit better than the first game. Sure, it’s still switches and other things like that, but it works well for the game. Some of the additional puzzles require a little more thought, but don’t drag on too long to take away from the platforming.

Another great change in Labyrneath II is the larger variety of levels. This includes some boss fights, autoscrollers, and riding platform levels that help mix up the gameplay. Some of these do slow the game down at times, but never overstay their welcome.

The visuals in Labyrneath II are akin to those in the first game. The difference here is that this entry in the series pays closer attention to detail and doesn’t have as many graphical glitches.

If there’s one area that Labyrneath II doesn’t improve in, it’s the audio. The game still uses a wide range of different chiptunes throughout its stages. That’s great as I enjoy the variety. Unfortunately, this has the same issue present in the first game where they don’t feel like they match the setting and action on the screen. Just to be clear, I’m not saying the music is bad, just that it doesn’t fit.

Overall, Labyrneath II is a solid improvement over the first game. It also hints at the fact there is going to be a third game in the series. I’m looking forward to that as the developer behind these games is clearly growing and I can’t wait to see what they do in Labyrneath III.