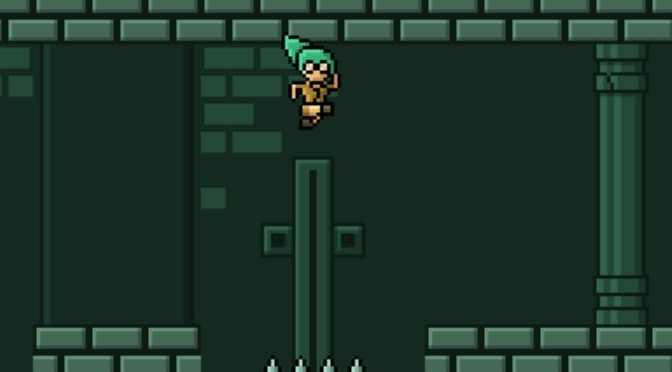 My goal this week was to find something a little more simple to review. Not simple in a bad way, either. Just more of something that was more reflex based than requiring critical thought. I succeeded in that quest when I found Labyrneath.

Labyrneath is a 2D platformer that puts the players in the roll of a busty woman with green hair that is out to explore some ruins. Her adventure has her seeking the legendary treasure that awaits in its deepest depths. The player doesn’t really learn that from the game until the very end, but it’s whatever. The story is paper thin and not at all my reason for playing the game.

Players control our heroine with the Arrow or WASD keys. That’s it. Nothing else. It’s simple and easy to pick up. The physics in Labyrneath are also spot on for platforming. There’s a nice sense of float to the controls, but not so much that the player feels like they lack fine control over the character.

Anyone looking for good platforming will be happy with Labyrneath, but is also offers more than that. The game likes to throw in extra little puzzles to give the player more to do. These are some of the more basic puzzles types. I’m talking pushing boxes, flipping switches and the like. That may seem simple, but it isn’t a bad thing. The game does a great job at introducing these puzzle types throughout its levels and then combining them later on for more challenging trials.

Labyrneath also makes sure to put plenty of platforming challenges throughout its levels to give players a tough time. While I never had much trouble getting through these obstacles, I’m also a big fan of platformers. There were quite a few occasions where I almost died, but scrapped by with the skin of my teeth. That’s always a satisfying feeling. Even if the platforming is a bit difficult, the game is never unfair about it. There are also a nice amount of checkpoints to keep players from having to repeat the same sections too many times if they are having trouble.

When it comes to the visuals in Labyrneath, the game isn’t bad. I’m not going to say it is the best looking game out there, but it is satisfactory. It definitely looks like a browser game and there are a few graphical hiccups here and there, but nothing game breaking.

The audio in Labyrneath is…strange. The game chooses to include several songs throughout the game. That’s good. However, most of them feel out of place. It isn’t even that they aren’t chiptunes. It’s just that they don’t match up well with exploring ancient ruins. The main song on the title sounds right, but that’s really it. The sound effects are also generic, but I wouldn’t call them bad.

Overall, Labyrneath is a good way to waste some time. The game has some issues with its presentation, but the gameplay makes up for this. It is nowhere near a perfect game, but I have no trouble recommending spending  the 10 minutes to 15 minutes that it takes to beat.