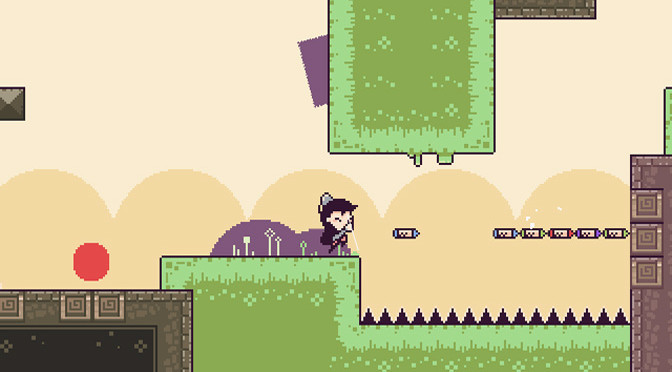 This week I’m back to browser gaming and my search lead me to a game that was entered in LudumDare 32. (For those who don’t know, LudumDare is a game design competition that challenges contestants to create a game with a specified theme in 72 hours.) This game is Crayon  Poke.  The version of Crayon Poke that I’m playing is an expanded version from what was entered in the contest and includes extra content.

Crayon Poke is a 2D platformer that requires players to solve puzzles as they move through the game. Along the way, players will pick up skulls that expand their abilities. This includes gaining the ability to throw crowns and double jump.

Throwing crayons and double jumping are natural extensions of the game’s platformer focus. Crayons that are thrown will stick into walls and can be used as platforms to advance up them. Crayons can also be stuck into each other to create long platforms for getting over wide gaps.

Double jumping is a pretty standard upgrade for a platformer. However, the way it flows with the crayons make for interesting gameplay. This is because players have a limited number of crayons that can be thrown (10, to be exact). After obtaining the double jump, players can reach new areas simply because they don’t have to use as many crowns to solve puzzles.

I really enjoyed how this game handled its puzzles. There was a mixture of skill and forethought that was required to move forward. Messing up a single crown throw could cause the entire puzzles to fail and not properly planning where crowns should go to complete the puzzle can also come back to bite the player.

If there’s one thing bad about Crayon Poke, it’s that it’s short. This is to be expected from a LudumDare entry. However, one bonus that this version of the game has over its original version is that there are four hidden secrets that players can find in the game. This addition helps extend the amount of time that players can spend with the game, but also lets them beat it fairly quick if they are just looking for a few minutes of entertainment.

The artwork in Crayon Poke is really interesting. The characters, backgrounds and other elements all come together to create a very cohesive look. If the style looks familiar to you, then it should. Raiyumi is one of the developers behind this game and they were also responsible for A Kitty Dream, which was another Time Waster I reviewed some time back.

The audio in Crayon Poke is also solid. The game only has a single music track, but it fits really well with it and more isn’t needed because of how short the game is. The sound effects also fit well with the overall theme of the game and match actions.

Overall, I really enjoyed my time with Crayon Poke. I wish the game was longer and had more puzzles to it, but I understand why it’s so limited. The fun puzzles and interesting platforming make it a solid Time Waster. It’s graphics and audio are also well done and help the game be a little better than your average browser game. I’d advise checking it out if you have 10 or 15 minutes to spare.