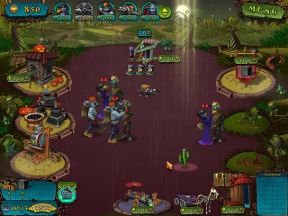 The Time Waster learns what it takes to save vampires in a pumpkin world!

Welcome Time Wasters to the world of the dead! Where zombies and vampires battle it out in time management fashion!

Okay so that doesn’t exactly sound exciting and quite frankly you’re right, it isn’t. This week I jumped into another of Alawar’s frenzied time management titles, Vampires vs. Zombies. Now I know that time management and zombies may sound like a survival horror game where we have to hold back the foul creatures until our helicopter arrives to save us but this is quite the opposite. Instead we are treated to a casual game where planting and harvesting an endless amount of pumpkins is the only way to defeat those wretched undead.

But perhaps I should backtrack a little and tell you why exactly pumpkins are going to save the world.

The story behind Vampires vs. Zombies involves a African dictator who has an army of zombies join him in his attempt to make over the world in his image. Okay I can deal with this, but how are the zombies infecting people? Is it the stereotypical biting process, maybe this virus is an airborne one? No, the zombies are taking over other people by having them watch TV. Yup, TV, no joke. Now I get the whole television turns us into zombies gag and all that but this was taking it a little too far in my book.

Now, of course the vampires can’t just sit around and let this happen. After all who will they feed on if the whole world is turned into zombies, right? Well there could be a deep story about how the vampires are immune to the zombies and they decide to harvest them as they are easy prey. Instead they fight back to eradicate their fellow undead.

Now we move onto the pumpkin part. Evidently having mass amounts of Jack-o-Lanterns will fool the zombies into believing that they are actually human heads! So of course we should do that so we can distract the zombies and kill them more easily. Wait, what? You mean to tell me that Vampires, the hardcore conniving gentlemen of the undead are going to have trouble killing mindless zombies? I give up.

Well onto the gameplay then!

As I said Vampires vs. Zombies is a time management game much like Farmville or Alawar’s own My Farm Life so we’ll be spending a lot of our time rushing around to get things done. This is the one thing that Alawar did right with this game. Not often will there be time to sit back and relax as we are always trying to complete and order of Jack-o-Lantern bombs on time or sending vampire soldiers to the front lines. The only problem this time around though is the lack of excitement I found in the game. This is a game about a huge war between two of Satan’s most popular spawn and yet here we are on a farm taking our time to plant pumpkins and watch them grow. For a farm simulator this isn’t bad, after all the whole point of the game is to make a better farm, but with a bigger goal in mind I just felt as if what I was doing was a waste of time.

I can’t really compliment the graphics of Vampires vs. Zombies either. All of the cutscenes are played out in 2-D cartoony pictures that are such a low quality that there are pixilated edges to all of the characters. Pixilated is good, if you’re making a retro styled game and even then it requires some moderation when it comes to character portraits.

There isn’t really much else I can say about Vampires vs. Zombies. With its shallow attempt at a goofy story, frantic gameplay that still somehow bores, and graphics that would make an artist cry I can’t warrant it as a good buy under any circumstances.

Vampires vs. Zombies could only manage to harvest 2 out of 5 GiN Gems from this disappointed gamer.