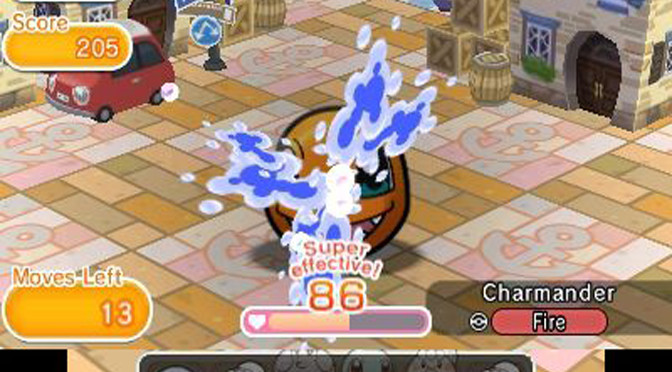 Alia here, and this week I’m taking the lead on the Time Waster in place of my husband. Don’t worry, he’ll probably be back next week, he’s just opting out this time because I have a game I’ve been playing. Now, with introductions made, let’s get on to the review.

This week I’ve got a freemium game for you guys, and a Pokemon one at that. The game is called Pokemon Shuffle: a free to play Pokemon puzzle game on the 3DS. Anyone who owns a 3DS and has an internet connection probably got the same message I did about this game’s free download, and some –like me– downloaded it despite the tickling in the back of your mind that was telling you no (or in my case, Billy repeatedly saying “don’t do it”).

But what is Pokemon Shuffle? Well, simply put, it’s a matching game with Pokemon elements. In this game you go into battles against Pokemon, use your assembled Pokemon team to beat them by lining up three or more to attack, and should you win within the move limit, attempt to capture the Pokemon you were fighting. You play through nine levels of wild Pokemon, and upon reaching the tenth, you may come across a trainer battle where, upon winning, you are given a Mega Stone of for one of the Pokemon you previously captured. Pretty straight forward.

However, there is a little more to it than simply lining Pokemon up for the best damage possible. For one, all Pokemon have an ability that can be triggered in battle. Charmander, for example, does more damage when you match up four in a row, while Pikachu’s ability leaves the foe paralyzed. Mixing abilities based on combat situations can actually be pretty helpful, and while “occasionally doing more damage” is the most common of abilities, it’s still a neat idea.

Secondly, as is common in Pokemon games, your Pokemon level up as you battle and progress. Though leveling up only makes your Pokemon hit harder, it’s an almost necessary grind in order to complete battles as the difficulty slowly increases. Choosing which Pokemon to bring into battle is also made extremely easy with the use of Pokemon Shuffle’s optimize button. Hitting this button will automatically set Pokemon with an elemental advantage to your party, and while you can and will make some changes depending on your preferences, it’s a quick and easy way to get who you need (most of the time).

Another thing that makes Pokemon Shuffle a little more engaging is that your opponent is always trying to screw you over, be it by turning your Pokemon icons into ones of themselves (making your attacks “not very effective”), freezing your Pokemon, or turning them into useless blocks. Some battles even have your opponent doing all of these and more. This means that your choice of Pokemon can sometimes make or break your battle, and a couple of times I brought in Pokemon who had no elemental advantage simply to help on the board. But going into battles blind can sometimes lead to your downfall, and this is where my major complaint comes into play.

As you will have with freemium games, you are given a set number of lives to play with (five for Pokemon Shuffle). One life equals one chance at a level, and that life only comes back after waiting a real-world half an hour. So you can imagine how frustrating it is to not know what kind of hazard battle you’re going into, and then end up wasting a life because you were not as prepared as you could have been, and through no fault of your own at that. Yes it is one life, but when one life equals half an hour, that’s a half an hour that you only wish you could use in game.

Pokemon Shuffle’s constant asking if you want to spend money is also a bit taxing. “Need more time? Do you want to spend one of your rare jewels to purchase 15 more seconds? Do you want to spend that jewel to get more lives instead?” No, Pokemon Shuffle, I do not. Jewels are hard to come by in this game, coming in at about one jewel every ten levels. Sometimes you’ll get jewels from special events, but events can last for days if not weeks, so one jewel a week “maybe” isn’t what I’d call steady income. These jewels mean lives, and lives mean more gameplay, but what’s the quickest way to get jewels? Real money. So when Pokemon Shuffle prompts you to keep using the only jewels you have for minimal return, the reminder that this is a freemium game is ever-present and always there.

But all in all, despite being an accursed freemium game, Pokemon Shuffle is pretty fun. It’s aesthetically pleasing, its music is good, and it’s a nice time waster…in the ten minute increments of playtime you get every two and a half hours that is. Honestly, the biggest downfall of this game is that it’s freemium. Had this been a normal ten dollar game, I’d consider picking it up just to play and enjoy myself. But instead I’m limited in my fun and can only enjoy it when I bother to remember that I have lives back.

Pokemon Shuffle, I really wish you weren’t a freemium game, but you still earn 4 GiN Gems out of 5 for being well done.