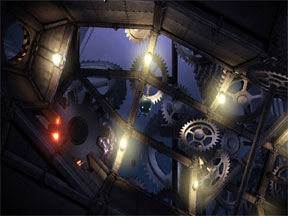 Hey Time Wasters, do any of you remember my review of the game Limbo? Perhaps you don’t, I did review it almost a year ago. But if you do, you may remember that I said that I loved the first half of the game because of its original takes on puzzle solving, but was disappointed that the second half became a run of the mill block pusher. Well this week I’ve got a game that reminds me of that black and white side-scrolling puzzle game. It’s called Unmechnical, and where Limbo failed, this game did not.

The story of Unmechanical is this: you are a little flying robot who has been snatched from the surface, dropped below ground and must now find your way back. All of this is done through solving puzzles and finding orbs of light so that you can progress through this living underground facility (there’s a giant beating heart, so I can only assume that it’s alive). As simplistic a story as it is, it easily absorbs you and tickles your sense of curiosity.

A clever side-scrolling puzzle game, Unmechanical put a grin on my face when I saw all the new and clever mechanics that had been implemented into how the game wants you to solve its puzzles. Many games that involve switch hitting and block pushing physics puzzles are usually pretty routine, but Unmechanical managed to keep me on my toes at all times, and for this I applaud it on its originality.

Another place, or rather a few places, that Unmechanical managed to succeed is in both its visual and musical features. Even though this game is a side-scroller, everything in it is done with 3D models, so the world really pops and looks alive. And though the world is mostly rock and metal, I can’t help but call it beautiful and really atmospheric. The music too sets the mood, and is frankly just nice to listen too. It reminds me a little of the music of Portal 2 with those computery, machine type sounds.

With a game that I feel is so close to perfect, it hurts me to have to pound on it for something that set my frustration level into overdrive. On several occasions I found that the game was extremely unforgiving with some of its puzzles, a few of those being where the physics themselves played a major part. Knowing what you need to do only to fail repeatedly because you weren’t 100% perfect in precision really ate on my patience. But more than that were some of the puzzles that were just too vague to figure out (I’m looking at you Colored Circle of Doom). I’m not saying that being vague is bad, but on some of these really in depth puzzles, giving no clue at all really hurt the game, and when I inevitably looked up the answer, I had to wonder just how the game expected me to figure it out.

But even with those few hiccups in the giant circuit of Unmechanical’s life, I still give the game a big thumbs’ up for its take on the old puzzles and making this game one that I actually got involved in.

Unmechanical earns 4.5 GiN gems out of 5.