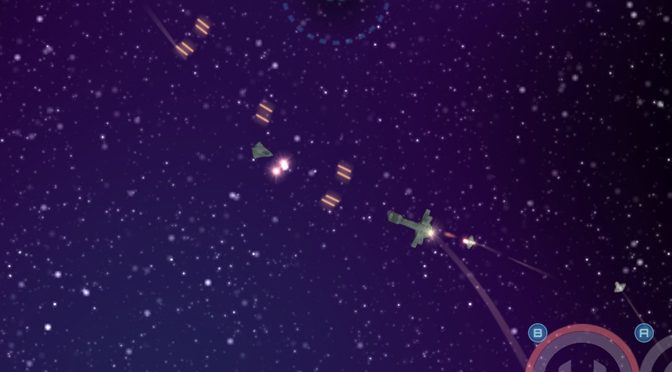 I’m not sticking to my mobile trend anymore. I mean, I am reviewing a game on the Switch, which is sorta mobile, but I won’t deny only playing this in dock mode. That game is Event Horizon.

Event Horizon is a space adventure game that has players taking on the role of a ship commander. As the commander, the player gets to manage various resources and send smaller ships out into battle. All of this takes place as they continue to explore the galaxy for resources.

The whole part about managing resources is actually only a minor part of Event Horizon. It’s there and players will use it, but I wouldn’t call it the main focus of the game. Instead, I would argue that it’s the battles that will take up most of the player’s time.

This is due to how frequent battles are in the game. Just about any time a player enters a new area, they will face a battle. These battles range is difficulty. This can have them being laughably easy to somewhat difficult. I’d never quite say the space battles are hard, but they can offer a challenge every once in a while. At least until the player starts obtaining more ships and upgrades.

Once players are able to bring more ships with them, battles becomes a joke. That’s because it’s only ever one ship versus another. This lets the player just trade ship for ship if they want to and still come out on top. There are also just plainly some ships that have way too much power and the enemy AI really isn’t all that good.

The biggest problem with Event Horizon is that it doesn’t have an end goal. It’s just the player continuously exploring space without any real purpose. Sure, buying new upgrades and ships is nice, but it can only entertain one for so long before it becomes a bit of a bore. I personally gave the game a couple of hours before it got stale. Even worse is the fact that I’m not likely to ever go back to it. Luckily, I was provided a code, because $6.00 seems like a steep price for two hours of mediocre entertainment.

One word perfectly describes the audio and visuals in Event Horizon: uninspired. It is all just so rough around the edges that it feels like there wasn’t much in the way of passion behind this project. That also probably explains my issue with the gameplay.

Overall, Event Horizon is a game that is easy to recommend skipping over. It doesn’t offer much in the way of gameplay and the lack of an end goal is a real downer. It just really doesn’t have much going for it.

One thought on “Passing By Event Horizon”