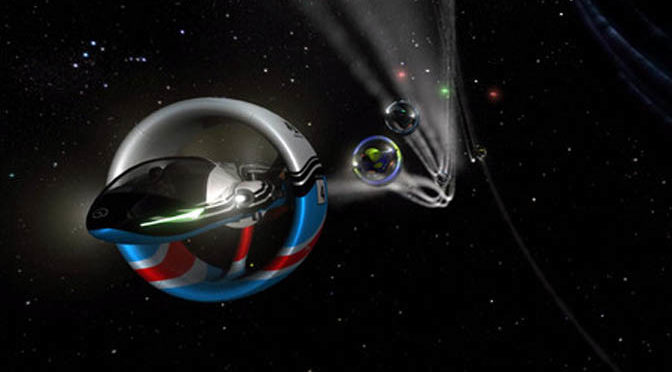 This week for the Time Waster I’m revisiting a game that I’ve already talked about here before. That game is Orbital Racer. I last looked at this game when its demo came out a little over a month ago. That demo came out shortly before the final version of the game, which means there really isn’t much that has changed. As such, I suggest checking out that review before readying any further into this one.

Orbital Racer still contains the Arcade and Simulation modes present in the demo. They both have their advantages and disadvantages, depending on how the player likes their games. I’m more of an arcade racer myself, so that’s how I spent my time with the game.

One thing to note about the full version of Orbital Racer is the Career mode. Players can access this in the Arcade and Simulation play styles. The mode has players choosing to take part in different races during a season to earn more. This money can go toward upgrades for their ship. Winning races in a higher position earns the player more money. It also gives them the chance to take part in more challenging races later on.

The racing in Orbital Racer is enjoyable enough, but it doesn’t really pull the player in. The biggest reason has to do with the track design. Every track is just a collection of rings around various bits of scenery. These are mostly just satellites that often get reused in different courses. As such, it doesn’t make each race feel like its own course. This and the lack of major set pieces to really create a unique look for the ” race tracks” is a bit of a disappointment.

I also have to point out is that weapons feel just as useless in the full version of Orbital Racer as they did in the demo. This is still due to the unlimited number of decoys the player can use to throw missiles off their trail. However, I will note that the AI seems to be much more challenging in the full release, which is a bonus.

Another small gripe I have with Orbital Racer is the control setup. Players can use mouse, keyboard or a controller to play the game. My first time booting it up was at my TV while Steam was in Big Picture mode. My attempts to navigate the menus with the controller were useless as this can only be done with the mouse. That first attempt at the game only saw me playing one race before quitting due to the inconvenience of having to get up and choose tracks with the mouse in between races.

Overall, Orbital Racer isn’t a bad game. I’d even say it’s a good one, but only if the player is from a very specific audience. That would be someone who loves sci-fi (check), enjoys racing games (check) and doesn’t mind if a lot of the courses feel the same (no check). Check it out if it seems like the game for you, but maybe wait for it to go on sale first.