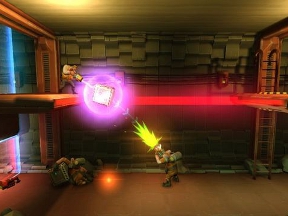 Welcome back Time Wasters and let me regale you with the story of Rochard (Ro-chard, not Roc-hard by the way) and what it could have been. I’ve got to say that I was really anticipating Rochard and sadly I think that might have been what did it in for me. There was a lot of hype around Rochard as an indie game and I was excited to play it. Sadly, though, I was disappointed.

Rochard starts out by introducing us to its main cast John Rochard, Skyler, and Maximillian. This is where Rochard started to go south for me. I couldn’t bring myself to like any of these characters, which was okay in Maximillian’s case as he is the bad guy but the over stereotyped personalities of John “Backwater Bumpkin” Rochard and Skyler “Hi I’m overly British” (No offense intended toward GiN’s own Chella Ramanan).

Things will only get worse as we dive into the attempt at a story Rochard has. Here is the basic rundown. John Rochard is a down on his luck astro miner that can’t seem to hit that jackpot of space diesel all while his space station is breaking down from a lack of maintenance. It only gets worse when he finds a generic plot twist. Now John must fight to uncover what is behind these ruins and why exactly they have symbols all over them. I think you understand what I’m getting at here.

The gameplay for Rochard tries to break the norm and make it interesting but was still dragged down by its own faults and the lackluster story.

Rochard is very much a side-scrolling game with a heavy mix of puzzles thrown in. Our main weapon is the G-Lifter, a mining gun that controls gravity. We will use the G-Lifter to solve a massive amount of puzzles found in the game. My only real problem is that there isn’t really any diversity in the puzzles. Grab this item here, take it over there, and bring it back over here, rinse, wash, and repeat.

It isn’t that there wasn’t potential for Rochard it’s just that nobody on the development team could create anything half way entertaining. The idea of gravity control with a gun has been done in the past. To use it in a puzzle situation has a lot of possibilities and still Rochard was left wanting.

Graphically the game wasn’t all that bad. Sure there were a few glitches here and there and the character animation was a little above bad but oftentimes nobody pays attention to these things so Rochard could’ve gotten by with it easily.

On the subject of voice acting…where do I even start? Well the game isn’t exactly high budget and I get that. In fact I could usually overlook poor voice acting in a game if it other qualities could make up for it, but as my review shows they can’t. It also doesn’t help that I think the voice acting is what really helped in making me hate all of the characters in Rochard. So no dice there either.

At the end of the day all Rochard left me feeling was like I’d been dragged down an old gravel road while having one of the potential scripts from the fourth Indiana Jones movie read to me. I can’t really advise this game even though it’s only $10.

Sorry Rochard but you broke under pressure and only get 1.5 GiN Gems out of 5.