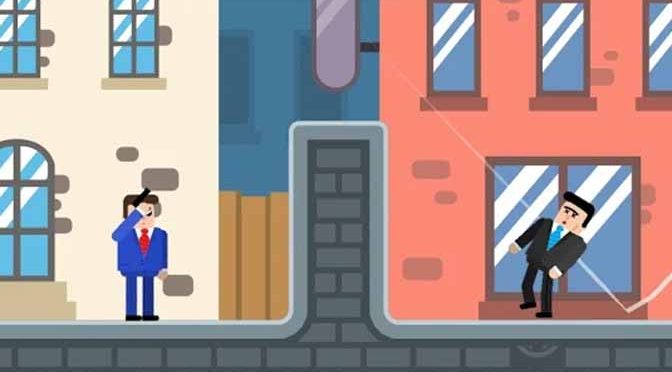 I’m sticking with mobile time wasting this week as I’ve been incredibly busy and not spending much time at my computer. Luckily, I have Mr. Bullet, which is a game I’ve been nursing over the last couple of weeks.

The basic idea behind Mr. Bullet is that players are a hit man solving puzzles to kill enemies. These are usually done through ricocheting shots around the map. Players only have a certain amount of shots to complete the task, but that’s never really much of a problem. 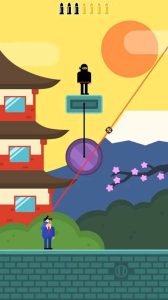 The main issue I have with Mr. Bullet is how easy it is. It may be a puzzle game, but players will find it easy to get max stars on every level due to the low difficulty. Every once in a while there is a level that the player might only get two starts on, but they aren’t often and are easy enough to figure out on a second attempt.

It’s funny, Mr. Bullet is actually a lot like Shootout 3D. This was a game I played a few weeks ago with a similar setup. However, I think it did some more interesting things with its gameplay, but had worse issues troubling it. You can check out that review here.

The one thing that Mr. Bullet does have going for it is a variety of gameplay modes. These include friendly fire, which causes the hit man to be killable by his own shots. It’s more challenging than the base game, but not by much. There’s also a grenade mode, hostage mode, mission mode and more. These different modes were able to keep me playing the game longer. There’s also some interesting mini games as well that are worth checking out.

As always, I can’t talk about mobile games without mentioning ads. Mr. Bullet is a little on the heavy side. Not by much though. The game as least lets the player go through a few levels before hitting them with an annoying video ad. It’s other problem is pricing. The game runs off of a subscription service where players can get rid of ads and gain other advantages for $6.00 per month. 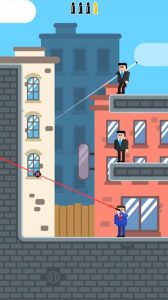 I’m just going to come out an say it. This game is only worth a max of $5, and that’s as a one-time purchase. The idea of paying a subscription fee here is atrocious and isn’t something that mobile games need to be moving toward. The market is home to all the worst trends in gaming already without this spreading any further.

Visually, Mr. Bullet is alright to look at. It has some simple cartoon-like graphics that make me think of all those “humorous” comics that old people share on Facebook. It’s not great, but I can’t say it doesn’t get the job done.

As for the audio, I can’t really say much about it. The music is either non-existent or quiet as all get out. The sounds effects are also pretty standard. So there’s not really any surprises here.

Overall, Mr. Bullet is an alright way to kill some time. It’s a bit better than most of the trash that populates the Play Store, but still has it’s own issues. I can safely give it a soft recommendation, but don’t go into it expecting anything grand.