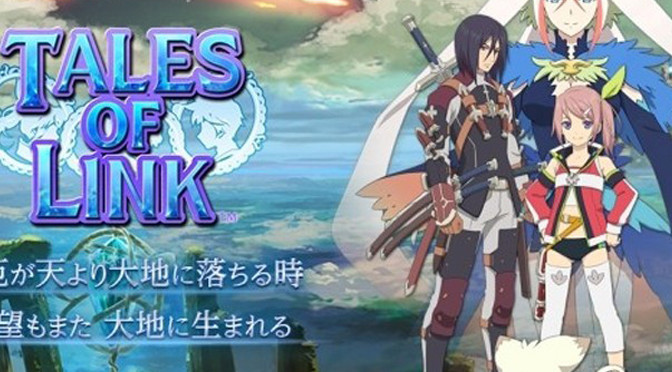 This week I spent my time with Tales of Link, which is a new entry in the Tales of series that is available for mobile devices running Android and iOS.

Tales of Link starts players out as an amnesiac that turns out to be the savior of the world. They join a scantily-clad girl named Sara and a magic dog with a smartphone on its collar that goes by Lippy in an effort to purify the world of Seeds of Ruin. These seeds take people and monsters over and make them incredibly hostile. This happened to Sara’s brother and her personal stake in the adventure is to save him. The tale is spread out very thinly over multiple chapters and this hurts it. It takes a long time to see a new cut scene in the game and they’re really short when they are reached.

Honestly, the story in Tales of Link isn’t really all that good. It’s some generic JRPG tropes that are shoved together in the mobile game. The real reason this game exists is for fan service. The hero of the game with the inability to remember anything but their name has the ability to summon heroes from other worlds to help in battle. This lets the player make a team that includes all of their favorites from the various games in this series.

Collecting heroes and making them part of the team is easy. The player will get Hero Stones as they play through the game. These can be used to summon different heroes. The summoning is random and players never quite know what they’re going to get. The best bet is to wait and use more of these stones for summoning groups. These often include stronger heroes and can give the player a free extra roll as well.

Once heroes are collected, they can be thrown into the player’s party. The party consists of a Leader, two Subs and six other heroes. The Leader and two Subs can activate their special abilities in battle to give the player boost. These can range from increasing certain kinds of attacks, to healing the party and changing different icons on the grid.

When in battle, the party will show up on a 3 x 3 grid with different symbols under them. These symbols determine what element that character will use when they attack. It’s obviously a good idea to hit enemies with elements they’re weak to. Characters that are located next to, or adjacent, of each other and share the same element symbol can be linked together for stronger attacks. It’s even possible to link all nine characters on the field and this will result in the final character in the string performing an immensely powerful attack. There are also heart symbols that can show up under the heroes. These can be used to heal the party and also become more powerful when more are linked together.

Attacking with heroes builds up LP. LP can be used to activate the abilities of the Leaders and Subs that I mentioned above. It doesn’t stay after battle, so don’t be shy about using it to finish a battle quicker. Players can also team up with friends to use abilities that their leaders have and increase their party’s strength. Strangers can be teamed up with as well, but they won’t include their Leader’s abilities.

This is the core knowledge needed to get started in Tales of Link, but we’re nowhere near done with this game. It’s a lot more complex than I expected a smartphone game to be and it’s not always for the best.

After completing a few battles, players will likely be looking to power up their heroes. This can be done by leveling them up with LP. No it’s not the same LP we were using for battles earlier. It’s easily obtained by selling worthless heroes and collecting login bonuses. The idea of worthless heroes may sound strange, but Tales of Link rates heroes on a star system ranging from one to five. Any hero with a rating of three or below is worthless. It’s not a bad idea to use them in the very beginning for a short period while getting started, but players should quickly start looking to summon more heroes and put ones with four or five stars in their parties.

There’s also a Limit Break feature that lets players combine two of the same hero to make them stronger. This only works when both the heroes have the same name and star rating. For example, players can use two three-star Yuris to make a stronger version of that character. However, these three-star Yuris can’t be combined with a Yuri sporting a five-star ranking. Doing this also doesn’t increase the character’s star rank.

Heroes can also have gear equipped to them. As expected, this will increase their stats in battle. Gear can be leveled up by fusing it with more Gear. Once it reaches its max level, it can be evolved into a new Gear if the player has the proper components in their inventory. Every time a player wants to fuse or evolve their Gear, it will costs them Gald, which is another form of currency in the game. Also, players can summon in more Gear by using Hero Points, which is yet another currency in the game.

Hero Points can also be used to summon Guardians that the player can equip to their party. The party can have one defense, attack and support Guardian. These Guardians are also ranked using the star system as well and players should just sell off lower ranked ones. There’s no way to level up or Limit Break Guardians.

Heck, if you’re still reading at this point then I commend you. If you can’t tell, this game is way more complex than it needs to be. It’s only been out for about a week, but I’ve already put dang near 20 hours into it and there are still other features in the game that I haven’t used yet. Most of this time has been spent on the main story and managing my team, but there’s also an arena to take part in, event quests, and missions that characters can be sent out on. These missions usually take an hour or two to complete and can offer rewards like Gear, heroes and more. The arena and event quests also have their own special rewards to collect that will help the player beef up their party in a jiffy. 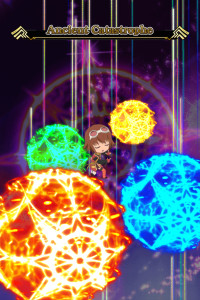 You know what’s one of the best things about Tales of Link? It rarely requires players to buy stamina to keep playing. This is a common feature in many app games and it has always annoyed me. This game doesn’t really care about that, though. Sure, the feature is there, but I went on a six-hour spree playing this game once during the week and never had to use a Stamina Gel to keep going.

Heck, I’ve never spent real world money on Hero Stones either, but I have a strong party filled with leveled up four- and five-star heroes. It may be a free-to-play game, but it definitely feels more like a full game with the lack of required in-game purchases. This is a huge positive, but I really have to wonder how Bandai Namco expects to make money off it without these transactions or ads.

Small note: I had this game crash on me several times while playing. This was obviously a bit frustrating and it sometimes caused me to set it aside for a period of time. However, it was really good about picking up exactly where I left off. Right down to the exact turn I was on during combat.

The art style in Tales of Link isn’t bad. It’s all chibis during battle, which feels appropriate for a mobile game, with full-size images of the characters displayed on menus and during cut scenes. The attacks are also fairly flashy and make for a nice distraction from the sheer amount of information the player will have to take in.

The audio is also solid with the game featuring a full-voice cast of Japanese voice actors. No worries, all text in the game is in English. There’s also good sound effects for battle and when navigating the various menus of the game. Plus it has a nice opening theme.

Overall, Tales of Link is stupidly complex. There’s five or six different types of currency in the game and each one is linked to a different feature. The amount of menu navigation required to level up, Limit Break, fuse, evolve, sell and arrange characters and gear is a bit overwhelming as well. However, players that are willing to sit down for more than a few hours and figure everything out are rewarded with a fun battle system, polished aesthetics and the ability to play as their favorite characters from the Tales series.

Tales of Link earns 3 GiN Gems out of 5!