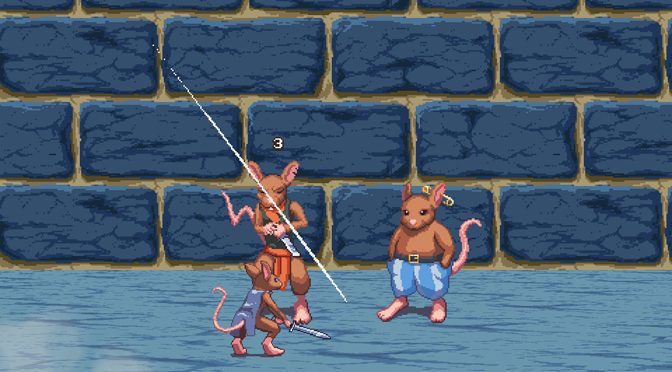 First off, excuse me if I’m a little rusty. Alia and I have been traveling and house shopping, so I haven’t actually been writing the Time Waster for a little over a month. Instead, I just worked ahead to have reviews running for those weeks. Unfortunately, we are still house shopping, but things seem to be going quite well. With all of that out of the way, let’s talk about Small Saga.

Small Saga isn’t actually out yet. The game is still in its Kickstarter, which is running now, and has a demo available for download. That’s what I spent my time with this week and now you all get to hear my thoughts on this one-man dream project.

The Small Saga demo introduces players to a world where mice, rats and other small animals have levels of intelligence similar to humans. It also takes place in the modern day, but there’s one neat twist to it. These small animals are in a period of their existence that is the equivalent of our middle ages. Our two main characters are brothers that are journeying to “heaven” to find a stash of food for their colony.

It’s interesting how the mice and other animals in the game acknowledge humans. Rather than just seeing them as another animal, they believe them to be gods. The developer has done an awesome job with this by adding flair to the language of the mice. This includes calling what would just be a pocket knife to humans a “godblade.” These types of weapons have an almost legendary aura to them because of their difficulty to wield. They also have some other neat names for things, like calling mousetraps “thundersnares” or using bread crumbs in lieu of potions. These little flairs in the writing give Small Saga loads of charm.

The gamplay of Small Saga is that of a turn-based RPG. It has a neat little system where certain actions require different amounts of stamina points. Players regain one point per turn and some actions, such as defending, don’t take any points to use. It actually makes me think of Bravely Default and that’s one of my favorite games of all time.

The Small Saga demo is a bit short, so I can’t talk a whole lot about the combat, but I do appreciate how it handles leveling up. Rather than just hitting the player with random stat increases, it lets them choose what they want to increase. The basic stats are there, but it also has the ability to increase stamina. This lets the player store more action points for use during battle and that in turn lets them perform stronger moves more often. It isn’t overly complex, but the ability to customize my characters is always something I enjoy.

Moving on we can talk about the graphics in the Small Saga demo. The game goes for an isometric view during normal gameplay and switches to a more behind the back view for combat. The isometric view for walking around works well, but it’s really how the camera works in combat that is selling me so hard on this game. This includes dramatic camera angles, black bars that come in to focus on the combat and more. It just makes the whole experience feel so much more epic than what a static camera does.

The visuals in Small Saga are also great. The game goes the sprite art rout and it works dang well. The guy behind this game really understands sprite art. Not only does the art look great, but it is well animated to. The game has a great sense of fluidity to its movement and the extra care from the developer shows.

The audio in Small Saga is another bright point for it. The game utilizes music well to bring certain emotions during the demo. There’s one point where the audio compliments the visuals so well that it’s fear inducing.

Overall, I have incredibly high hopes for Small Saga. It has loads of promise and the demo leads me to believe it can match up to it. The game is about halfway to its funding goal as of this writing and has a little more than a week left to its campaign. Here’s hoping that it gets fully funded. Even if it doesn’t, I hope the developer is able to move forward with it.