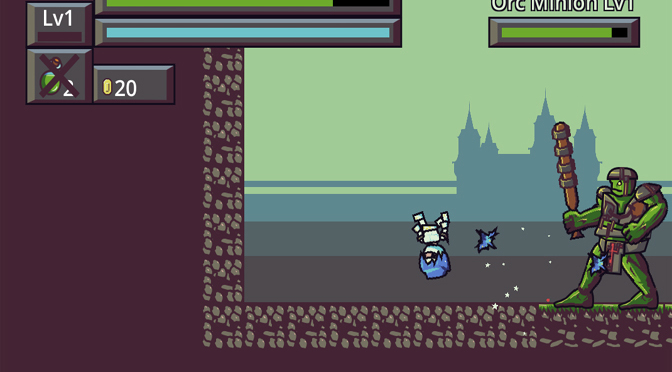 I’ve gone further than any hipster has hoped to go. Instead of just checking out a game in it’s alpha, I’m looking at one in its prealpha. Get your fedoras and neckbeards ready! (Note: I do own a fedora and have been known to sport a neckbeard from time to time. It’s a joke, people.)

Alright, so this week’s game is called Jobchanger Brigade. It’s a 2D game that has RPG elements combined with hack-n-slash combat. The game is very early in its build so there isn’t much in the way of story. All I can figure is I’m a dead guy that is a mercenary in the afterlife or something like that.

The gameplay of Jobchanger Brigade is really interesting. As I said before, it’s a 2D hack-n-slash with RPG elements. However, it also adds in the ability to switch between different jobs to change how the game is played.

In its prealpha form, Jobchanger Brigade offers players three different jobs to choose from. Each of these jobs also have two different styles that make them play differently from each other.

The first job is the Warrior. Players are given a sword and specialize in close-range combat. The first style offered to Warriors is designed for ground-based combat. The second style focuses on air combat.

The second job is the Wizard. Players start out slinging fireballs at enemies, but have the option of switching to ice magic. Fire is great for long range and ice is a medium range spell. To compensate for the range differences, ice magic deals more damage.

The last job available in the Jobchanger Brigade prealpha is the Ninja. Ninjas overall have a focus in medium-range combat. The initial style of the job is ground-based while the secondary style is air based.

Also unique to the jobs in Jobchanger Brigade are special attacks. These can be done by holding and releasing the attack button and take magic to use. Each style of each job has its own unique special attack. One trait that stretches across all jobs is the ability to dash. This also consumes magic, but makes for a great way to dodge enemies.

The Jobchanger Brigade prealpha features several missions for players to check out and get an idea of how the game plays. Taking on different missions with different jobs adds a little extra play time to the early version of the game and I could see it being a draw in the final version.

The game definitely needs some balancing as some jobs are more powerful than others. A perfect example of this is the Ninja. Not only are its attacks able to hit from a good ways away, but it can also infinitely climb into the air with one of them. One of its styles is also able to heal itself with a special attack without much in the way of consequences for doing so. This is of course an early version of the game and I’m sure these types of changes will be made once more of the groundwork has been laid down.

One feature of the game that I didn’t really get to check out was the multiplayer. The game requires Hamachi (or similar software) to connect with other players and I honestly didn’t find it to be worth the trouble to set up and work with for a prealpha game. I’ll definitely give it a more serious attempt when the game is further along in development. I did see the basis of multiplayer with my own single player attempts. It seemed to me that it’s an arena mode that would have you and a partner killing off waves of enemies.

The graphics in Jobchanger Brigade are simple and neat. The design of the characters and world remind me of a storybook. If I had to complain about one problem with the game it would be the world. It just looks way too cookie cutter as all of the terrain blends in and the block looks mostly the same. Yet again, I expect this to change after the game has been further developed.

The audio in Jobchanger Brigade is off to a good start. There is a nice amount of sound effects already in the game and they’re of a good enough quality to pass for a final release. I’d love to talk about the game’s music, but at this point in development there ins’t any.

Overall, I think there’s a lot of potential in Jobchanger Brigade. The game is young and there obviously needs to be some improvements made to it, but it works very well as a proof of concept. Follow the link to check the game out for yourself.

(Note: Games that are currently in development aren’t given a score and a placeholder of 2.5 is used instead.)