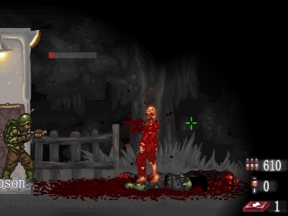 We’re back to the living dead this week with another Time Waster all about my zombie love! The name of the game is Deadly 30 and it’s all about surviving a zombie apocalypse for 30 days. Let’s jump right in and take a look at the gameplay of Deadly 30.

The gameplay of Deadly 30 is that of a basic 2-D side scrolling game. We play as a soldier who must survive the zombie filled nights by building up the defenses at his base. This ranges from upgrading the fences around the base to buying turrets to fend of zombies. All of this is created by collecting scrap metal that is dropped by zombies and can be found by adventuring around in the world during the daytime.

Along with upgrades to our base we can use scrap metal to purchase new weapons and ammo. There are three basic types of guns to be found in Deadly 30; machine guns, rifles, and shotguns. All the weapons are self explanatory so I won’t bore you with the details of what a shotgun does. Also we have a sword for melee attacks but it’s about useless because of how close to a zombie we have to get to use it. Sure against a single zombie it might be okay but zombies attack in hordes and more often than not you’ll be injured by the zombie when you go in to attack.

Our zombie enemies also upgrade the longer we stay alive. Sure we start out with the normal run of the mill zombies but as time passes we run into zombie that deal more damage, run faster and much much more.

The game has an okay art style to it and surprisingly enough the animations are really well done. I’m not trying to be insulting but normally smaller games like this tend to suffer a little in the animations department, so kudos to Deadly 30 for surpassing my expectations here.

Here comes the bad part of Deadly 30, it’s too dang hard! I know this seems like a ridiculous claim but I’m telling you that it’s as if we aren’t actually meant to survive the 30 days no matter what. Now I’m not one to knock on a game for challenging the player (something that I might add has been missing from modern games) but there is a point where you have to take a step back as a developer and say ‘No one is ever going to beat this, we should tone it down a little’. That being said this could almost be considered a game killer. I mean what point is there to playing a game if we don’t get that sense of achievement for completing it. Sure I know someone out there will prove me wrong on this and say the game was a piece of cake, but I know I’m a good gamer so this still doesn’t pass as an acceptable level of difficulty for me or most other gamers.

So we have a game with some pretty solid gameplay and a fun if not overused idea behind it. Combine all of this with its good art and sound and we would have a pretty solid title, but with the difficulty as is I can’t really recommend it as a good game to play. Sorry Deadly 30 but your challenge was just a bit too much for this Time Waster.