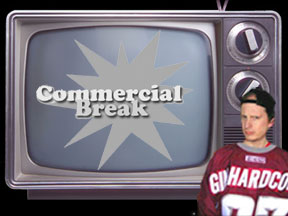 You know, when Sony apologized and manned up for the PlayStation Network security breach last year, I accepted their apology, but still I had plenty of doubts about if I would be able to completely accept them as much as I do Microsoft and Xbox Live. After all, this security breach hit gamers pretty hard, and some of them, myself included, have not even put their credit cards on file again. I ended up purchasing PlayStation Network prepaid cards as a result.

It seemed that Sony couldn’t do any worse’until a patent was unveiled on NeoGAF’s forum. While the patent was posted on July of last year (ironically, right after the E3 when Sony apologized about the breach,) it was exposed on the forum last week. The patent name alone should be an instant cause for alarm’
ADVERTISEMENT SCHEME FOR USE WITH INTERACTIVE CONTENT

That’s right readers. Just when you thought that suffering through in-game advertising, paying for online passes, and even killing off used games on the PlayStation 4 isn’t enough, now Sony is trying to find another way to increase their revenue by interrupting the game you are currently playing. The patent describes the ‘scheme’ as they call it (a perfect word, by the way,) as doing the following:

1. Providing a user with an indication that the playing of the interactive content will be suspended.

4. Rewinding of at least a portion of the interactive content.

Yes, before you ask, #6 and #7 were not actually part of the patent.

Think about it. You are in the middle of a huge firefight in Black Ops 2 and all of a sudden, a warning screen will pop up warning of an incoming advertisement. The ad will play, and then alert about going back to gameplay. This distraction will be long enough to get your player killed. Is this how the game industry is going to end up?

Again I hear Nate’s classic excuse of the game industry being ‘just a business.’ And to an extent I can understand that. Yes, Sony, your company suffered losses of 260 billion yen ($3.2 billion,) and having that crippling network breach and outage took a heavy toll. And yes, we do know that you have to cut 10,000 jobs (6 percent of your workforce.) It’s a difficult situation for you all, and you need to find ways to rebuild your income. But I will promise you this, if you force gamers to watch advertisements in the middle of a game, you will end up LOSING money because people will be boycotting your products.

I do know that this was just an announced patent, and that, hopefully there will be people out there with a lot of common sense that will shoot this down. We already have to deal with in-game advertising via product placement (all the damn Pepsi signs in the Bionic Commando sequel) and slogans being uttered in sports games such as MLB 12 The Show, but now we have to deal with patents like this.

Again it makes me wonder why I am still involved with this industry. I still love playing my games. That will never change, but if companies like Sony make it any worse for me to play, I will have to go back to playing the classic games. At least those that do not try to mess me over with in-game advertising, killing of the used game and rental markets, and now forcing us to watch ads while playing our games! Enough is enough, Sony!