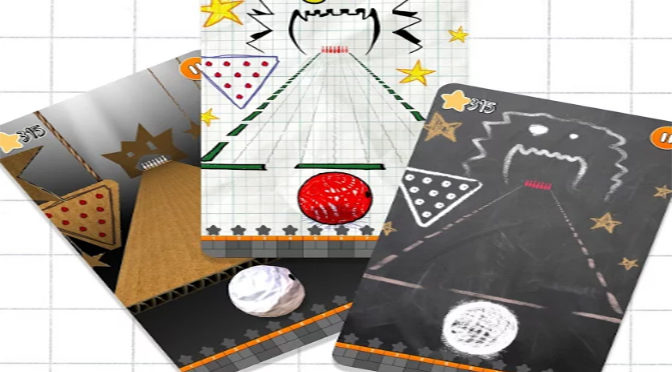 I’m still sticking to my smartphone this week for my gaming needs. Part of that is because it is easier to search the Play Store for games than checking various websites. The other part is that Alia has taken to using my computer lately. She got herself hooked on Dragon’s Dogma: Dark Arisen after watching me play it for a few hours. I haven’t played it since.

While browsing the Play Store, I came across a game called Doodle Bowling. It seemed simple enough and I was up for something a little different after grinding in Digimon Heroes last week. Unfortunately, it wasn’t all I was hoping for.

As you may have already guessed, Doodle Bowling is all about knocking down pins. The game has players sliding their finger along their screens to throw the bowling ball. Once thrown, players can swipe left and right to affect the curve of the ball. It’s simple to get the hang of, but maybe a little too simple.

The biggest problem with Doodle Bowling is how incredibly easy it is. Players just have to swipe straight down the middle of their devices and they’ll get a strike almost every time. There’s really just no challenge here. Sure, the game has online leaderboards, but what does it matter when everyone can easily obtain a perfect score?

The “Doodle” part of Doodle Bowling also isn’t anything special. It’s just that the backgrounds look like they were drawn by a 10 year old. Sure, it gives the game a little extra flavor, but that’s about it. There’s also loads of different themes to buy. I mean, holy crap no one is ever going to buy all of these themes. It’s not that getting stars, the in-game currency, is hard, but it is time consuming. You get them for completing games and getting strikes. Watching video ads also gives more of them.

Speaking of video ads, they suck. I’m not against a game that has video ads in it in exchange for currency or items, but Doodle Bowling doesn’t stop there. The game will also randomly hit players with mandatory video ads in between games. Take note developers. There’s no better way to scare players off than forcing them to watch a video ad. Especially without giving them anything in return.

Now is the part where I talk about the audio. It’s there. Okay we’re done. No, seriously. Sure there are sound effects, but the game contains no music at all. It’s incredibly bare.

Overall, Doodle Bowling isn’t a good game. It’s way too easy, lacks depth and forces players to waste time on useless video ads. Don’t even bother picking this game up for even a small period of time.

4 thoughts on “Hitting the Lanes in Doodle Bowling”