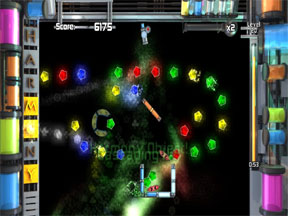 Alright, Spring Up Harmony, me and you shared some quality time together. I got to learn all about what you are and even went so far as to look past your faults and continued to give you chances hoping that you would turn out to be great. You on the other hand proceeded to waste my time during Finals week. I shouldn’t be so mean though, let’s take a look at where exactly you went wrong.

The problem was at your core Spring Up Harmony. It was your gameplay.

The gameplay consists of shooting orbs out of a cannon in an attempt to hit other random objects, such as triangles, squares, and other orbs so that they fall into you bucket at the bottom of the level. The orbs are all color coded, four colors to be exact, red, blue, yellow and green. When firing these orbs at objects on the screen the goal is to hit those that are the same color as the orb you are firing. This will cause the object that is hit to lose its anti-gravity floating and fall to the bottom of the level. As the object falls if it comes into contact with another object of the same color it will also cause it to be affected by gravity as well.

The game even mixes it up in later levels by creating lattice style chains so that shooting one object and causing it to fall will break the chain and leave other objects falling around. Or that some of the objects you shoot are connected to moving platforms so that you have to time your shots to get the maximum effect of the object falling through the level. In the end though, even these attempts at mixing up gameplay to keep it from getting stale don’t help.

I know that reading this summary of the gameplay doesn’t make it seem all that bad, but you’ll have to trust me here when I say that this game is missing that addicting factor that keeps you coming back for more.

Well enough about talking about what you did wrong Spring Up Harmony, instead let’s take a look at what you did right, because honestly you hit the mark on a few things.

The graphics in this game are really easy on the eyes. The style and color scheme used radiates happiness to me. All the little orbs have small details of flower petals inside of them as well, which might explain the name of the game because otherwise I don’t see where it’s coming from.

The best part about the graphics in this game though is the animations that fill the screen when two objects of the same color collide. The falling objects leave a trail of somewhat see through flowers in the hue of the object. This little animation was beautiful, I saw so many flowers across my screen at times that I felt like I was back in the 60’s hanging with the hippies.

Along with doing a great job on the graphics of this game you did another thing right Spring Up Harmony, you’re music was perfect for getting lost in. Simple tunes flowed from my speakers, into my ears, and gave a feeling of calmness (now if only the gameplay would have allowed me to enjoy this properly with addicting actions that leave you stranded in play for hours).

Yet again another thing done well in Spring Up Harmony is the sound effects. All the sounds, from orbs colliding, to the clicks between menus are crisp and clean. I know this doesn’t seem like much, but when it comes to sound effects getting it done just perfectly can majorly help in creating the addicting atmosphere of a good casual game.

So the final verdict on Spring Up Harmony is that it’s kind of like the "perfect girl" story. She is a real knockout looker, has a voice that is silky smooth, but in the end she is a psychopath and you’re going to want to stay away from her or else become her next victim.