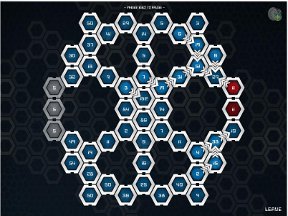 This week I spent a fair amount of time playing the game dotHack. No, it isn’t that JRPG that simulates an MMORPG (which is a great series if you can track it down). This dotHack is a strategy game about taking over the world! MWAHAHAHA!

Gameplay in dotHack consists of building forces and taking over enemy territory. It’s not all soldiers, testosterone and guns. This is a game about hacking after all. Instead we have cells. Cells are small hexagonal cases that have a numerical figure representing power. There are three different types of cells. First, the Blue cells. These cells we use to fight. Red cells belong to the enemy and our ultimate goal is to remove all red cells from the game. Both blue and red cells produce more force every second. Finally, we have grey cells. Grey cells are neutral and don’t increase their force over time. Applying enough force with either a blue or red cells will change a grey cell into either of the respective two. Take over grey cells and then force out the enemy cells and remove them from the map. It sounds really complicated when put into text but trust me when I say it’s an easy concept to get a handle on.

One thing that did disappoint me about the gameplay of dotHack is that there isn’t a multiplayer feature. This is a game that I would love to be able to go online and play against friends. I know that isn’t done very often with browser-based games but that’s starting to change and I hope that more small developers will take this into account. I will say that there is an impressive amount of content in dotHack as it features 26 levels and three different difficulty settings.

Moving on, let’s talk about the graphics of dotHack. First off there really isn’t much in the way of graphics. A simple display with cells in it isn’t exactly the most detailed looking thing. I will give props for having crisp clean visuals and an easy to navigate menu.

The sound is in the same boat. There isn’t much of it. Yet again this is a simple strategy game so it isn’t as if there needs to be explosions and heavy metal blaring through my speakers. The simple blips, bloops, and bleeps of cells taking over other cells are enough to satisfy even if it doesn’t overachieve.

dotHack is a fun little strategy game that shows us what fun can be without all the bells and whistles. With a bit more time and effort it could be a great game that has its own unique flare but even now it isn’t a bad way to spend ten to fifteen minutes a day!