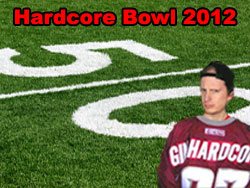 Here we go again! This Sunday is Super Bowl XLVI. I do admit that I’m pretty neutral for this year’s game, but that’s because not only are the Steelers out of contention, but I also got what I wanted out of the season: no more Tebowing, and no Ray Lewis performing any stabbing gestures to the Lombardi Trophy.

While I am neutral on who wins this Sunday, I know a lot of people are wondering how the game might end up, and as usual, it is my sworn duty to simulate the game and make a prediction on the winner. I know that I am not 100 percent accurate in my picks (last year for instance) but I still enjoy doing it.

Last year was the first time I provided a video feed of the Hardcore Bowl, and I received a lot of recommendations of how to make it better. I am taking everyone’s advice and making the game full length, as in 15 minute quarters, but on live ball plays, the game clock will run down to 10 seconds. In addition, the most recent rosters and tuning files will be used, all on All-Pro difficulty (as opposed to All-Madden on previous years.)

One thing does need to be addressed before we start the video…the Rob Gronkowski situation on the Patriots team. Talk leading up to the Super Bowl has been about Gronk’s high ankle sprain.

He is as of this writing listed as "day to day" for practices, but did say on ESPN last Saturday (when the Hardcore Bowl was recorded) that he will play. As a result he has been added to the Patriots roster.

I think I’ve said enough; they do say that actions speak louder than words. And with that, time to get the Hardcore Bowl started. Here we go!