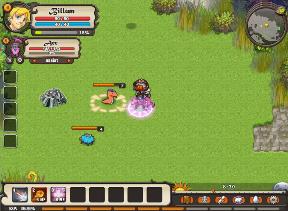 So this week we are going to make another big jump in the genre of game we are playing. Don’t worry though it won’t be all that bad. After all going from two weeks of casual games to a grinding RPG shouldn’t be all that bad, right?

Right. So let’s get this started.

Castaway 2 as I already stated above is a RPG, specifically and adventure RPG. Gameplay is fairly reminiscent of the "insert random word here" of Mana series. There are creatures, they have levels and health, and you swing your weapon until you kill them. Which to be honest sounds like every RPG so maybe I should tell you a bit more.

Battle will be as simple as hitting the spacebar to swing your weapon. Hitting the creature in front of you will cause it to try an attack back. Now you can swing away at the creature until its dead, but it doesn’t stop there! After leveling up you’ll notice that you now have access to new spells and abilities. These spells are activated by first dragging them to your quick bar and then clicking on them in battle. Each spell cost a certain amount of mana and has a cool down time on them. This is something I am going to have to complain about. If I’m going to cast a spell in any type of game then I only want to have to pay one cost. Why would I want to pay two? Instead developers should either increase the cool down times or increase the cost. This probably explains my lack of MMORPG playing as most of them use this formula.

So I’ve told you the basics of combat, obviously. Now we move onto some of the other fun features in the game, like the crafting system. Castaway 2 proudly says that it has more than 100 different items to craft, and for now we will trust in its word. I haven’t had the time to try and craft all the items, and honestly I don’t intend to either. You’ll be using the crafting to make a lot of different item in this game as well. From armor and weapons to healing and mana potions, crafting will be your best friend for cheap items in game.

Another neat feature in Castaway 2 is the pets. When beating monsters senseless with your weapon of choice you’ll sometimes come across a monster egg. Take this to the breeder and they will incubate the egg for you until it hatches into a creature. The creature will be whatever you killed and got the monster egg from. Taking a pet with you helps out with battle since they will assist you in fighting whatever you are fighting. Having pets is a fun little feature that wasn’t really needed and isn’t adding unnecessary features to games a sure way to make it better (Ignore the joke it really is a good feature).

As for the story of this game, well it isn’t exactly original. You are a random guy stranded on a deserted island. You have no memory of how you got here and no idea what you should be doing. I’m sure that playing the first game would have probably helped me out in understanding the story. Which I actually did play, but like so many other fun flash games I lost track of it and never went on to finish it. I know it sucks right? Still maybe after I’m done with this one I’ll go ahead and revisit the first.

As for the presentation of the game, well let us start off with the graphics. The graphics are styled in the same way that Zynga (Farmville creators, just in case you didn’t know) does every one of their games, an Americanized representation of the eastern drawing style known as chibi. What is chibi you ask? Chibi is when you draw a really small body and then attach a really big head with really big eyes. Maybe I’m a little biased because of my love for anime, but the American version of chibi doesn’t get across cute to me. Instead it leaves me with a deep feeling of being creeped out.

The music in Castaway 2 is pleasantly nice to listen to. You have a few different beats playing when in the overworld or a village. The music fits perfectly into the background so that you’ll notice it while traversing the world but won’t care if the battle sounds interrupt it. So when it comes to the sound I have to give kudos to Castaway 2 for a perfect execution of music and sound effects.

So overall Castaway 2 is a solid game, I’d even go so far as to say it is worth paying for if it was on a mobile device. Which makes me ask why more games like this don’t end up on PSN or Xbox Arcade, oh well this way I didn’t have to pay so why am I complaining?