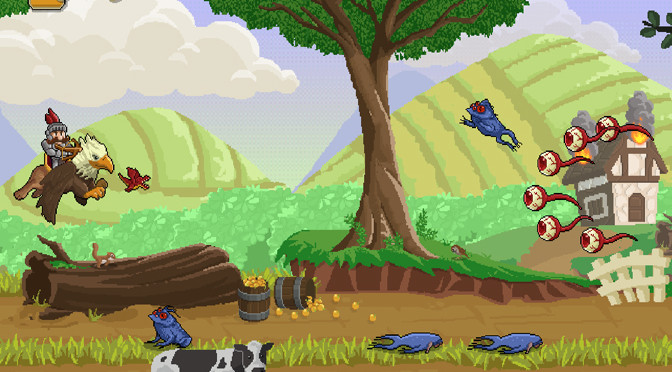 This week was fun trying to get the Time Waster ready before my deadline. Remember that RAM issue I mentioned last week? Well, the new RAM didn’t get to me until late Thursday, which means I had less time this week to play than normal. However, I was still able to make it through Gryphon Knight Epic and I got some recording of it done (you can check that out further down in this article).

If you’ve never heard of GryphonKnight Epic, then you’re missing out. The game is all told from the prospective of Knight Oliver. Oliver and his companions defeat and evil dragon that kidnapped a princess in the opening of the game. Oliver falls in love and marries the princess and everyone loots the dragon’s cave. Oliver is busy making googly eyes at the princess and misses out on all the sweet weapons stored in the cave. Instead, he gets a crummy old amulet. However, years later he discovers that this amulet split his evil half from him and its causing chaos. He sets out to get help from his companions, but those weapons weren’t the best thing in the world for them.

Gryphon Knight is part side scrolling shooter, part Mega Man and a dash of Metroid. Sounds like a strange combination, right? Well Gryphon Knight Epic pulls it off wonderfully.

The game has the basics of a side scrolling shooter down. Players are tasked with dodging incoming fire while spamming the screen with as many of their own shots as possible to make it through a level. As is the norm, players start on the left side of the screen and move to the right to head forward. However, Gryphon Knight Epic mixes it up by letting the player turn around. This is handy for picking up missed items, but it also has other uses.

Remember how I mentioned Metroid above? Turns out that Gryphon Knight is all about letting players explore levels for hidden rooms and secret areas. These rooms typically contain extra treasure and such, but there is also a hidden Relic in each level. Finding these Relics unlocks stat boosts for the player, increased speed, more energy, the ability to breath under water are examples, and also unlock new lore that adds to the game’s story.

The end of each stage has the player taking on one of Oliver’s companions that helped defeat the dragon. These characters have been possessed by their evil halves that were drawn out by the weapons found in the dragon’s lair and its up to Oliver to stop them. Defeating these character will result in them giving their weapons to Oliver so that he can use them on his quest. There’s even a small screen when a weapon is obtained that looks just like it does when Mega Man gets a weapon from a robot master. Each weapon feels unique and players are sure to find one that fits their play style.

(Check out the first level of Gryphon Knight Epic below!)

I’ve already mentioned the Relics and weapons that can be got in the game, but it doesn’t stop there. Relics and weapons can both be upgraded for a fee. Upgrading them will increase certain aspects of them and will aid players on their quests. Some Relics will also give the player extra abilities that can lead them to new areas in already-completed levels. This really helps the game’s replayability and gets players extra gold for their upgrades at the same time.

There’s also a large variety of potions that can be bought at shops inbetween levels. The health ones are the most important, but others, such as invincibility, replenishing energy and berserk for rapid fire, will definitely help players if they find themselves in a particularly hard battle.

Shops also sell squires. These squires are basically the bits that players can get in other side scrolling shooters. There are ones that shield from attacks, give additional gold and have the ability to steal life from an enemy. They’re helpful and are another case of players being able to choose the right ones for their play style. They can also be switched out during levels if a certain situation calls for a different squire.

The graphics in Gryphon Knight Epic are also really solid. It’s 2D pixels, but its a step above what most other indie games go with. The backgrounds have a lot of small details to them and many of the larger enemies in the game look wonderful.

The audio in Gryphon Knight Epic is also pretty good. There’s weren’t any particular songs that stuck out to me as memorable, but none were bad or didn’t fit the section of the game they were in. The sound effects were also solid. Most importantly, the sound of Oliver shooting his crossbow wasn’t very pronounced, which meant it was less of a grind on the ears since it was constantly being fired.

Overall, Gryphon Knight Epic is a really good game. It’s a unique blend of genres that I haven’t seen before and that definitely makes it stand out as a more interesting title. It’s also rocking a solid story that is serious at times, but also has a good bit of humor injected into it. The graphics are solid and the audio isn’t bad either.