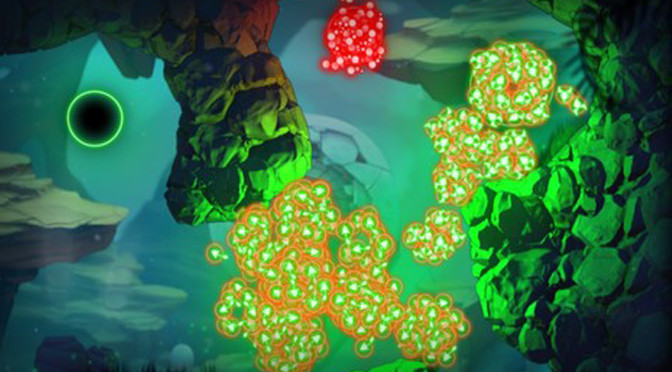 Remember how last week I said I had a  game I wanted to review, but the release of the Monster Hunter 4 Ultimate demo derailed my plans? Well, now I’m back on track and ready to talk about Boid.

Boid is a game that is currently available through Early Access via Steam. I know Early Access games are a bit of a source of controversy and I understand it. Why buy a game before its finished based on promises that could never come true? Boid is one of those cases where it’s worth the risk. As it is right now, Boid cost $3 on Steam. For what the game is in it’s current state, it’s worth that.

Boid is all about real-time strategy in an underwater setting. Players start out with a spawner and send their troops around to take over other spawners and bases. Taking over different bases allows the player to turn their basic troops into different creatures. Each base will have its own creature type and will be guarded by creatures of that type.

The gameplay of Boid may seem simple, but it’s really not. There are a lot of options to weigh out when playing. Going after more spawners could give the player a numerical advantage, but then the opponent may take over more bases and have access to stronger creatures. players also have to keep frantically moving to keep units from just standing around doing nothing.

One of the better parts of Boid is the enemy AI. Having played against it over and over again, it’s easy to say that it’s not dumb. In fact, I can’t beat it on the Hard difficulty depending on the map. Added to this is the ability to play online with other people. There’s nothing like matching minds with a random opponent online. The only problem is you have to be able to find those players. There aren’t many at the moment so it can be hard to do.

The game offers six different maps for players to play on. This is a good amount of variety as matches won’t always go the same way twice. Yet again, more human players would make these maps even more enjoyable.

The graphics of Boid are neat. Units have simple looks and everything takes place underwater. Clicking around causes ripples to appear on the screen, which was cool to me. I also liked how it kept a good feeling of being underwater with background being blurred as if the player couldn’t see far.

The audio in Boid is alright. The game has some pretty standard battle music that feels at home in an RTS game. Sound effects are simple enough and help keep the clutter down on audio. Rather than speaking units will make different “beeps” and “boops” to confirm commands.