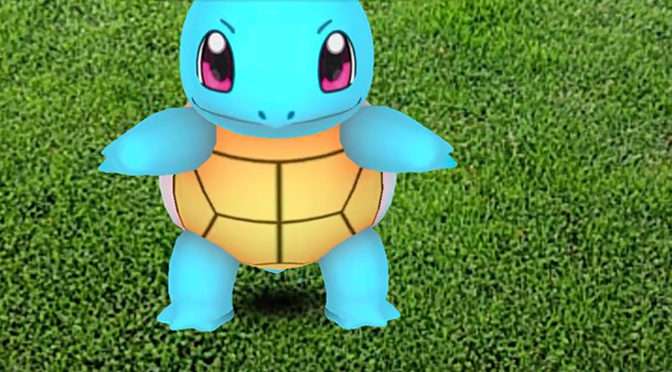 This week Billy is taking a break as I, his wonderful wife, have taken his smartphone in order to play the game that most of you probably downloaded the day it came out. Yep, this is a review of Pokemon Go.

For those of you unfamiliar with Pokemon Go, it is a smartphone game that allows the user to walk around town capturing Pokemon they encounter with the mere swipe of a finger. Yes, this means it takes place in your real home town, and yes this means you have to go outside in order to play. Once you slip on your shoes and venture out, you’ll come to find that some of your more renowned city locations, such as libraries, churches and other local monuments, are categorized as PokeStops. These places allow players to obtain Pokeballs, Pokemon eggs for hatching, and other items that the player needs in order to continue gaming. Gyms are also made out of these local points of interest, and upon joining one of the three major Pokemon Teams (Team Instinct, Team Mystic or Team Valor) you can battle for supremacy against your rivals or train in those gyms that are controlled by your allies.

To many of us who are Pokemon fans, this game seems a little too good to be true. We get to walk around and capture Pokemon in real life? We can battle at gyms and train our way to victory? Yes, yes we can. But does this long held dream of a game actually work?

Well…yes. Surprisingly, Pokemon Go is a surefooted first step in a direction that most of the masses want to keep going. The concepts behind Pokemon Go may not be perfect, but they work well together and balance out. Let me explain. In the normal Pokemon games you really only need to catch one Pokemon of any given species in order to train it to maximum level. Any Pokemon of that same species you meet afterwards is just experience fodder. This concept in Pokemon Go, however, is nowhere to be seen. Knowing that people are going to have to travel around and take whatever Pokemon they can get, rather than running into low level Pokemon that wouldn’t give much experience to a high leveled partner, the game makes every single capture important as each Pokemon caught gives the player items for leveling Pokemon up and increases your trainer level, even if you’ve caught the same Pokemon 50 different times already. This change in concept means that no capture is a waste of time, so even those with busy schedules can still enjoy watching their trainer level rise as they slowly collect those things they need for bettering their team.

So while the focus to capturing every Pokemon you see turned out to be a solid change to the usual Pokemon formula, the capture system is also fun and works decently well. Rather than just selecting a Pokeball and letting the game take it from there, it’s up to the player to control the strength and curve of their throws in order to succeed. This adds a needed skill to capturing, as well as tests the trainer’s timing since the Pokemon being captured can bat the Pokeball away when its attack circle shrinks. The only real problem with this set up is the augmented reality camera the game implements. While it’s fun at first to see Pokemon in your driveway or on your lawn, there have been several times for me when I’m not moving (and neither is the Pokemon for that matter) yet my target continues to awkwardly float away. Camera issues like these led me to turn off this feature, which, thankfully, was an option.

Unfortunately, the augmented reality camera isn’t the only blip in Pokemon Go’s gameplay. As anyone who’s played this game knows, server issues are detrimental to everyone’s gaming experience and results in wasted items, wasted time, and failed captures. For example, Incense, an item that draws Pokemon to your location for 30 minutes, continues to run despite not being in game, so if the server is down, you get a phone call, or you have an emergency, say bye-bye to your training time. This is something that really needs changed, especially in a game that roots itself in being able to be played while you’re going about your daily life. Another problem is that this game doesn’t run in the background on your smartphone, meaning it must be up at all times. While this is fine when your actively on the hunt for Pokemon, it unnecessarily drains the battery for those who just want to walk around and hatch an egg. Those in the middle of nowhere will feel this the hardest, for if they have no incense to draw Pokemon to them, they’re not going to be able to capture anything because they lack the necessary streets, and thus all they can do is walk around and hatch eggs.

But in the end, Pokemon Go’s positives outweigh its negatives, and I can really appreciate a smartphone game that’s not only fun, but makes people want to get out and exercise (especially with hatching eggs; no driving allowed). The only thing I would really change to the game (other than the incense timer and Pokemon appearing inside of out-of-bounds houses) is adding a random encounter feature for those people who aren’t able to walk around in towns and play like they’d want to. But this game is still loads of fun regardless of how often you get to play, and not being forced to pay money to do so is a huge boon to Pokemon Go’s success.

2 thoughts on “Getting Around in Pokemon Go”