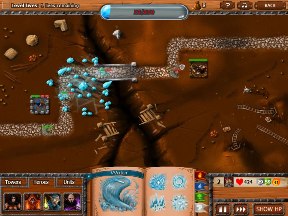 So for this week’s Time Waster I fell back into the world of tower defense games and while it wasn’t quite what I was expecting it wasn’t a bad thing either.

I played Heroes of Mangara. Yeah, I know if sounds really generic and cheesy but work with me here. Heroes of Magara is a tower defense game that is also an RPG. Yet again strange but still hold on here.

The main gameplay of Heroes of Mangara is that of your typical Tower defense game. Place towers here and let them attack the enemy. The real difference though in Heroes of Mangara is how much the RPG elements affect the tower defense part of the game. Instead of leveling up your towers in every match instead your heroes will level up based of experience they gain from killing enemies. After leveling the heroes now have attribute points to spend on whatever ability they would like.

The different abilities work off of a tree branching system. Take your wizard down the left path and he will focus on fire or you could take him down the right path and have him focus on ice. Each branch has their own advantages and disadvantages, though. For example fire may deal more raw damage but ice will slow an enemy which in turn allows your wizard to land more hits with his ice attacks. The same is true for the other three heroes in the game as well.

While playing Heroes of Mangara you are bound to wind up fighting some creature that heavily differs. This isn’t to say that the creatures are bosses or anything like that. Instead it’s just that they are around to keep you on your toes. For example, there are creatures called Fire Golems. As you might expect fire golems are immune to fire. This throws a wrench into my plans when my wizard is fully focused on fire. So instead I’ll have to switch him to his basic spell and grab a few apprentices to make sure I can kill the golems. This is just one example of the many creatures and situations you can run across in Heroes of Mangara.

The game isn’t bad on the eyes either. Granted it is the normal top down view that can be found in every tower defense game but hey what the heck, right? The environments are bright and beautiful looking with small unimportant details able to be found in the maps.

My only real complaint with the graphics is that all of the characters look incredibly gloomy. Not even in the emo sense, it just feels like the characters are very boring a lifeless when you view their full images in the tree branching screen.

Still overall Heroes of Mangara is a delightfully fun game and while it doesn’t exactly shake up the tower defense gameplay style it does add a unique twist with its traditional RPG aspects.

Heroes of Mangara fought its way to 4 GiN Gems out of 5.