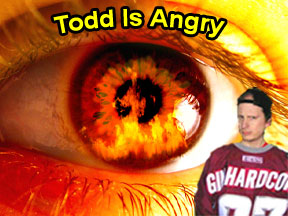 Warning: The following column is being written simply as a work of parody and is NOT meant to be taken seriously in any way possible.

A few months ago I wrote a column along with Chella about what really ticked us off the most in the game industry.

Needless to say we both got a little flack for what we posted, and I’m not surprised by it at all. But just a week ago I made a few comments on Facebook about certain individuals in our beloved business that really got under my skin, and Chella responded that maybe I should make a list of those who really made me the most mad, almost like a Public Enemies list complete with their crimes against the game industry.

I did not think it was a bad idea at all, but the challenge was originally trying to find ten based on the actions that caused them to earn my scorn.

But before I get started with my list, I want to provide two that Chella recommended that I ended up turning down.

Infractions include: Not keeping to his word on all the potential his games are supposed to provide.

I can see where Chella is going with Peter. All the promises he made with the Fable franchise never came to full fruition, and let’s not even forget about the "Milo" demo when Kinect was still known as Project Natal. Where is Milo?!? But the truth is, although I’m not the biggest fan of his games, I cannot see myself putting him on my list.

Infractions include: Giving false senses of euphoria with a virtual drug.

Ahhhhh, the MMO. As usual it is the bane of my gaming lifestyle. And yes, I know about those who spend hours on end doing absolutely nothing but playing World of Warcraft or any other MMO in general. But again you ask, why is it not on my list? Well, I can’t single out WoW from every other MMO that has ever been made. Maybe I can say it is responsible for inciting a cult of gamers who eat, breathe, sleep, and (definitely not) bathe in their beloved franchise.

Now with that out of the way I will get to the person, or in some cases, persons, that are worthy enough to make my list.

Infractions: Making stuff up to get his point across, no matter how crazy it is.

Yes, Jack is on the list. Who could forget all of his lawsuits, complaints, and flat out propaganda used to get his point across. According to Jack, any heinous act in society can be blamed on games. Kinda like playing 6 Degrees of Video Game Violence, isn’t it? He even went as far as threatening to use pornographic material as evidence; I kid you not!

Thankfully though there is one reason he is listed way down at #10. Since his disbarment, have we heard much from him?

Like Jack Thompson, Senator Palpatine, ERRRRRR, Lieberman is pretty low on this list because he too hasn’t been heard from much lately, especially after the Supreme Court’s big decision. But the fact that he spearheaded the whole censorship campaign back in ’93 is worth a permanent spot on my list. Not just that, but who could forget the way he couldn’t even get a correct version of a game in mind, when he thought the ARCADE version of Mortal Kombat was actually the Sega Genesis one. Also sending threats like "I really wish we could ban them constitutionally" (as was posted in the first issue of Next Generation magazine) helps tarnish his reputation.

If it weren’t for Bernie, I wonder just how the Saturn could have fared better in the States. With his belief that the Saturn is a "stillborn" and "not our future," tons of high quality Japanese titles were not seen by an American audience, unless they were on the PlayStation with diminished results (including Thunder Force V, Silhouette Mirage, and the only TRUE version of X-Men vs. Street Fighter with tag team gameplay.) Some other games such as Radiant Silvergun were never even seen in the states, until the Xbox Live Arcade version that came out earlier this week.

I always found it ironic that Stolar once worked for Sony, and then headed to Sega. Maybe they used him as a double agent after all to sabotage the Saturn’s life cycle?

Infractions: Possible insanity, obsession over a fictional character dying, thinking their beliefs are better than yours.

Oh watch out, any of you who criticize Final Fantasy, no matter how bad their games have been recently. Because we all know they will keep buying them and eating them up, and will shoot down anyone who opposes it. (Need I show you the endless pile of hate mail I get as a result?)

Even the massive failure that was Final Fantasy XIV has its defenders, and I dare to think of how they will support XIII-2, and (gasp, if the domain registration is true,) XIII-3!

Infractions: Cheaters, spewing out venom to anyone, especially to other races and gender.

I heard about some people talking about the end of single player gaming, and if that is true, the future scares me. Will we be forced to deal with others online who do not follow any sense of conduct or decency whatsoever? Will we have to deal with 12 year olds constantly yelling obscenities to others? Will female gamers be forced to hear sexual innuendos screamed in their ears all the time? (Thank goodness we have exposure sites such as www.fatuglyorslutty.com to bring this to the public.)

And what about the cheaters who will take advantage of any glitches they might find to win? Is that what the future of gaming is all about?

Originally my intent was going to be for one online site I mention all the time, but I thought of others as well. We’ve seen them fire reviewers because they gave a sponsored game a bad score, or being told to embargo low scoring reviews until after a launch date. But worst of all, some would do anything to get your money, even holding reviews altogether unless you pay for their subscription service. That is inexcusable in itself!

If there is one thing that is ruining Capcom, it’s the fact they are milking their franchises for every cent. Before it was releasing an update to their games year after year, but now with the advent of DLC, it is taken to a whole new level. We had the Mercenaries DLC for Resident Evil 5, and now there is the debacle with Marvel Vs. Capcom 3. They release a barebones product, only to later announce ULTIMATE Marvel Vs. Capcom 3 with MORE features that should have been in the original (spectator mode, anyone?) and charging it as a full retail, when it should have been updated as a simple DLC.

At least when they announced Super Street Fighter IV Arcade Edition as a retail disc, it was originally offered as a DLC add on. Why can’t they do that with MVC3? Anything to make more money it seems.

Infractions: Version inferiority, and accepting cake as a reward.

I guess they say anyone can be bought, and Gabe Newell of Valve is the perfect example. After all the comments he made about how the PlayStation 3 is "a waste of everyone’s time" and how difficult it was to program, he makes a complete turnaround at E3 2010 and promises that only the PS3 will get the best version of Portal 2 available. And if you look at how it looks on the 360 and PC, one has to wonder if it was done intentionally. Portal might say the Cake is a Lie, but it looks like the Gabe is a lie as well.

Infractions: Destroying Infinity Ward, admitting he doesn’t want fun in games. Ending some once great franchises, all with showing a smug grin in the process.

Anyone who says he just wants to take the fun out of games does not deserve to be in the industry. We’ve seen Bobby single handedly put an end to some once great franchises (such as Guitar Hero) and even try to ruin others by firing some of their developers (Infinity Ward.) He is even doing his best to get more of gamers’ hard earned cash by promoting the new Call of Duty Elite program.

I know there are some of you who are surprised he is not #1 on my list, and it was a difficult decision to make, but one other person just beat him out.

Anyone who has followed my columns know how I feel about this guy. Starting with betraying Dreamcast owners by claiming a dollar spent on them is one less dollar spent on the PS2, he has since moved on to proving his loyalty to Sony by making false claims in his ads that their games are PlayStation 3 exclusive (Madden, Dead Space, etc, etc, etc.)

But even that does not compare to the atrocity he founded, Project Ten Dollar, a blatant attack on used game buyers or Gamefly renters. Forcing people to pay a $10 online pass to get all the features is bad itself, but add the $25 Season Pass for all their sports titles, and we are dealing with true extortion. It’s time for us to stand up and say we will not tolerate these actions. I’ve already denied the Season Pass.

I’m sure a lot of you have your own list of people in the industry that have made you just as furious as these ten have to me (as well as Chella’s two.) Let me know what you think.

Waiting For: Gears of War 3 (360, and heaven help you, unnamed Game Store, if you decide to pull the "Memphis Warehouse" excuse again.)