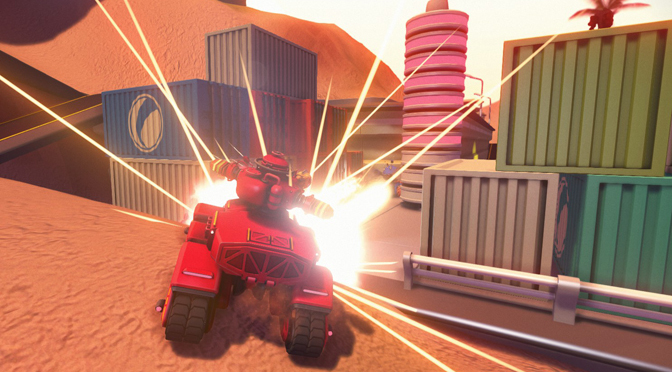 These week’s time waster is a free-to-play, Early Access game from Steam called Gear Up.

Gear Up is a multiplayer game that has players building and customizing tanks to duke it out in. There are 116 parts available for players to use when building tanks, but many of them have to be unlocked by playing the game. However, those who just want all the parts can buy a bundle with real money.

The gameplay in Gear Up is simple and fun. Players choose their already built tanks and are dropped into one of several arenas to kill each other. They can do this in Deathmatch, Team Deathmatch and Conquest mode. There are seven different maps for players to enjoy and two variations of normal maps. The game also supports up to 32 players in a match, but I never got that many to test it out.

This was easily my main problem with Gear Up. The game didn’t have enough players online at a single time to have huge battles. Most of my matches only ever saw eight people max. This isn’t really the game’s fault and it doesn’t help that it’s an Early Access title. Here’s hoping for more players when the game gets an official release.

Building different tanks to fight in is easily one the best part of Gear Up. There’s so many parts and combinations available that players can really customize their tanks to their style of play. There are also three different types of propulsion that make tanks unique. These are legs, wheel and jets.

Legs are one of the more interesting ways to get around in Gear Up. They aren’t very fast, but tanks equipped with them can climb on almost any surface. This allowed me to form different strategies than what I would have with any other type of tank. One example of this was when I used the legs to hang upside down from the ceiling of a building. I equipped my tank with a stealth piece that made me turn mostly invincible and then just waited for enemies to come by and would blast them.

Wheels act exactly like players would expect. Tanks with wheels have a lot of traction and are faster than tanks without wheels. These can be the downfall of any tank with legs as they can just zip around them firing off shots before the other player can properly react. I personally equip my tanks with wheels with a set of rocket boosters so I can easily jump between different levels and areas on the various maps.

Now we come to the final form of propulsion, jets. Jets are interesting because they allow players to go to place that no other tank can reach. I’m specifically talking about over water. Any other type of tank that runs into water will explode, but tanks with jets can fly over the water and even sit out over away from enemies. This unique ability had me equipping my jet tanks with sniper rifles to take advantage of the distance between me and the other players. One downfall of jets is that they have almost no traction and are hard to control when moving and turning.

This is how I built my tanks. The great part of Gear Up is that there are so many different strategies available. It reminded me of when my friends and I all played the Armored Core games in high school and compared our different builds for mechs.

I’ve got myself a premium copy of Gear Up, which has another neat feature. This feature is the ability to fight bots offline. I’ve always liked when games do this and I was glad to see it in this game. However, this mode of play hasn’t been refined much. Bots are really simple and can only be fought in a timed or deathmatch mode. This pits all of the bots against the player instead of letting the player set up teams. The bots also can’t be picked or customized, so players can only fight the three or four generic type the game throws at them.

The graphics in Gear Up are great. There’s a lot of detail to be found in it for a free game and the details added to different tank parts is nice. I’ve hit a few graphical glitches here or there, but nothing major.

The audio in Gear Up is a little lackluster. Many of the sound effects aren’t equalized properly and it leave the game sound rough (which it technically is). This made it hard to find a nice volume level to play at since only slight changes would have some parts of the audio blaring while others went unheard.

Overall, I like what I’m seeing from Gear Up. The game is definitely worth playing for free, but I don’t know if I could advise picking up the premium package just yet. Maybe I could suggest it after the game comes out of Early Access. Either way, Steam users should keep an eye on Gear Up.

As with all alpha and beta previews, Gear Up won’t be getting a final score and instead with get a placeholder score of 2.5 GiN Gems out of 5.