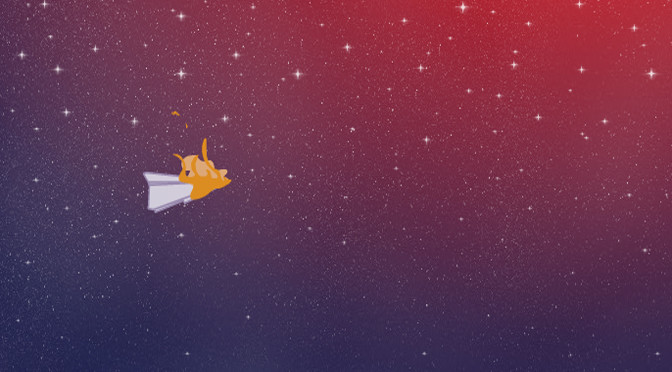 This week’s time waster is a little different than what I noramlly play. This week I spent my time with Icarus. Icarus is a game that is based off of the old myth of what happens when someone flies too close to the sun, except humans are replaced with paper airplanes.

Icarus is a game that was made for a game jam. For those who don’t know, game jams are typically events where developers are given restrictions and are told to make a game in a certain amount of time. This particular game jam had developers creating a game based on a story in the public domain and it had to do with paper in some way, shape or form.

Icarus is unlike almost any other game I’ve ever played in the sense that it doesn’t have a goal. Players are dropped in the game and told not to fly too close to the sun or too close to the water. Outside of this, the game doesn’t give the player any type of direction.

This leaves the outcome of the game to the player’s choice. If the player feels like it, they can fly too close to the water and watch their plane get caught in it, or they could fly into outer space and get burned up by the son. However, neither of these options is presented as what the player has to do to “win the game”. Heck, it’s just as easy to say that the player could continue to fly forward and only finish the game when they close their browser.

This concept is really unique to me. The idea of a game without a definitive ending that doesn’t tell the player what to do seems like it could have some real use in the industry. I’m not the person to work on such a game nor would I know how to utilize such a strange idea, but the fact that the idea exists in the first place is what really interests me.

All this said, there isn’t much in terms of gameplay to Icarus. Players control the airplane with the arrow keys and can only guide it up and down. As I’ve already stated, there are no goals in the game. The only thing to do is fly and maybe interact with the environment some. This includes picking up birds and having them ride on the paper airplane and flying through clouds to disperse them.

The graphics in Icarus are alright. The game has a neat style to it and the animations for moving stars in outer space were interesting. There isn’t much else to say about the game’s graphics since there isn’t much to the game to begin with.

The audio in Icarus is in the same department as the graphics. The game has so little to it that it’s hard to judge. I will say the audio is a bit better though due to the soothing sounds of waves and chirps of birds that made the game really relaxing. Moving into space results in a loud and somewhat annoying sound. Almost as if the game is trying to warn the player away from the sun.

Overall, Icarus is an interesting idea. I don’t think it could be called a proper game, but it definitely has a unique concept. Who knows, maybe the developer was lazy or didn’t have enough time to put a goal in the game, but it made for a really unique experience that may have potential to be used in other games.