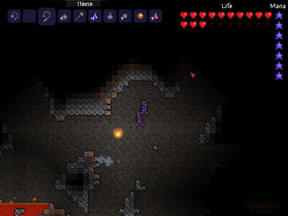 So last week a friend of mine says to me "Hey have you ever heard of Terraria?" Of course I reply with "What the heck is that?" Next thing I know I’ve got a gift copy sitting on my Steam account (Kudos to the max for my friend Trevor) and I’m ready to play. Three days later I surfaced.

That’s right I said three days, okay so there was some sleep in there but you get what I mean. In fact if it wasn’t for the fact I had to right this review I would still be playing right now (Curse you evil GiN overlords!).

So what you need to know about this game is that the story is non-existent, gameplay is like a 2-D Minecraft, and the graphics look like they were ripped straight from Final Fantasy. These are only the basics though, despite its similarities to many other games you’ll find that Terraria has a lot to offer.

Just for good measure let us look around this world called Terraria. Well, it’s very nice looking and there is a random NPC sitting there. That’s all there is to start with. That being said no one is going blame you if you use a wiki to get started. As mentioned before the game is similar to Minecraft. You’ll spend much of your time digging around and finding different ores to craft into better weapons, armors, and tools. The point where Terraria diverge from Minecraft is the inclusion of NPCs (merchants mostly) and Boss battles.

Currently there are three different bosses to be found in the game, The Eye of Cthulu (pretty self explanatory), Eater of Worlds (a giant worm that will follow you no matter how far you run), and Skeletron (a disembodied head and arms who kills me every time I want in that dungeon!)

So now we start to explore this world some more and we are noticing a few things. Like stars that fall from the sky, or a floating island that looks like the perfect spot to build your castle. Terraria has plenty of different things like this strewn about its world. In fact there is so much going on that I made a small world (there are small, medium, and large worlds) and I only just now feel like I’m starting to reach this world’s limits. No need to worry about losing my character though. Terraria allows you to take your character into whatever world you desire, so as soon as you’ve sucked one world dry you can move onto the next one (Maybe the story is that we are a human embodiments of Galactus), which leaves a lot of room for replayability.

Oh yeah I almost forgot, Terraria also feature multiplayer across Steam. So feel free to buy a four pack for you and three friends so that the adventure never stops!

So as I mentioned the game looks like Final Fantasy. This isn’t bad though, anyone who grew up with a Super NES will feel right at home in Terraria. The game just radiates so much nostalgia that I couldn’t help but to geek out over all the cool secrets. For example when equipping armor there are two different slots, one for real armor and another for social armor. Social armor is just what shows up on you if you want to look different than how the real armor looks. Now since this game feels old school it’s only appropriate that it would have some old school references. Like the "Hero’s Outfit, which makes you look like Link from The Legend of Zelda series. Or maybe you would prefer the "plumber’s Outfit, which as you may guess gives you the guise of Mario from the Super Mario Bros. series. There are more than just these outfits but they really hit home with me so I had to mention them.

As for the music of the game… it’s great! These simple happy go lucky melodies ran through my head even after I had quit playing the game. What more can you ask for than this right? Well how about the creepy but pleasant music of the night, or the raging score for boss battles? That’s right it’s all here and it all sounds so good.

Terraria mines 5 GiN Gems out of 5 for being a perfect example of a good Time Waster.