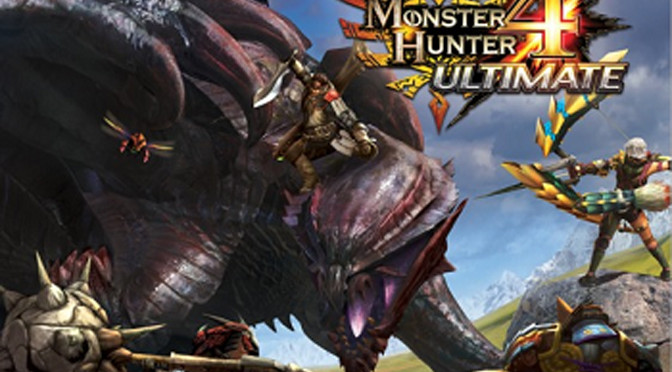 I came here this week to talk about one of two games I’ve been playing, but Nintendo didn’t want me to do that. Instead, they sent out demo codes for Monster Hunter 4 Ultimate to take up my time.

Monster Hunter 4 Ultimate is set to come out on February 13 with the release of the New Nintendo 3DS. The game is a normal 3DS game, but it can makes use of the added CStick on the New Nintendo 3DS. The release of these demo codes to select people has allowed me to test the game out for the first time and I wanted to share my thoughts on what I experienced.

The first thing about the Monster Hunter 4 Ultimate demo that I tested out were the two new weapon classes. The first new weapon is called the Insect Glaive. The Insect Glaive allows players to target monsters with a bug companion to pull essences out of it. These essences can enhance the players attack, mobility, defense and the last one heals. The player can mark different parts of monsters with a special attack that will change what essence they pull out of a monster. The weapon also has a leaping attack that can be used for dodging and getting on monsters’ backs, but more on that later.

The second new weapon introduced in the Monster Hunter 4 Ultimate demo is the Charge Blade. The Charge Blade has two different weapon modes. The first is a sword and shield and the second transforms it into an axe. Players build charge on the blade by attacking monster in sword and shield mode. Once the charge if full, they can add phials to the blade and transform it into axe mode for extra elemental damage. It can take a little getting used to, but it’s definitely an interesting weapon.

Several changes have been introduced to movement in Monster Hunter 4 Ultimate. Like I said above, players now have the option of jumping onto a monster’s back in battle to attack it. This brings up a minigame where the player mus fill a bar by attacking and holding onto the monster at different points. Filling the bar will break a part of the monster and gives players an extra reward (rewards for completing the minigame are limited in amount). My only problem with this is that it seems way too easy to do with the Insect Glaive. I’m afraid that the game will turn into a shallow version of Shadow of the Colossus, but hopefully I’m wrong.

Moving around terrain in the Monster Hunter 4 Ultimate demo is much easier than in previous games. When approaching small ledge, characters will climb up them on their own without prompt from the player, even when a weapon is unsheathed. This makes for much more fluid movement than what previous games in the series have had. Players can also jump off of walls to attack monsters and many more areas are climbable to help with this.

The Monster Hunter 4 Ultimate demo includes three monsters to let players test their skills. They are the Great Jaggi, Tetsucabra and Gore Magala. Those last two are new to Monster Hunter 4 Ultimate and the Gore Magala is the main monster of the game. However, don’t expect to beat this one. I have a guess that Capcom made it invincible for the demo to build a drive in players to defeat it in the main game. I’ve definitely seen some interesting attack patterns in the monsters and it makes for great training to prepare for the release of the game.

From what I’ve seen of Monster Hunter 4 Ultimate in the demo, Capcom has made some great improvements to the game. I’m still unsure of the Insect Glaive, but the Charge Blade seems very unique. Fans of the series are going to love the more fluid movement offered in the game and it goes a good ways toward cutting out useless actions and speeding up combat.

Honestly, my real reason for writing this inside look at the demo is that I love the Monster Hunter series. It’s easy for me to put hundreds of hours into a single game (I’m almost at 400 hours in Monster Hunter 3 Ultimate for Wii U) and I really believe more people should give the games a look. The more people that play the game means there are more people for me to meet up with online and play with, and why wouldn’t I want that?

As with a pre-release version of games, such as alphas and beta, I’m not giving a score. Instead, a placeholder of 2.5 will be used.