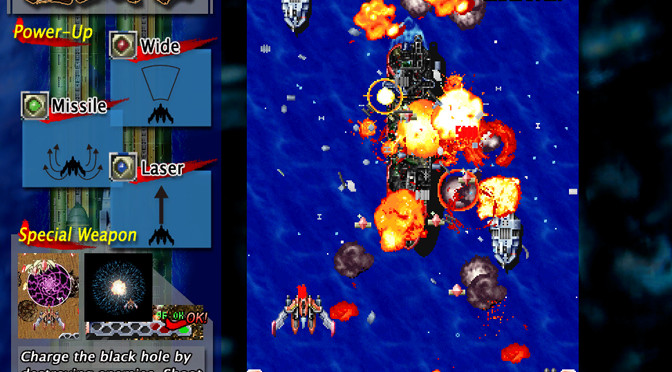 This week I spent my time with a game called DeltaZeal. It’s a top-down shooter that was first released back in 2002. Now it’s back via Steam and it brings a retro level of challenge to new players.

As with most top-down shooters, DeltaZeal doesn’t really have much in the way of story. This isn’t surprising as it was originally released as an arcade game. Players wouldn’t exactly have the time or patience to sit down and listen to a deep story line while at an arcade.

This means that DeltaZeal is all about the gameplay. This isn’t a bad thing. The focus on making a game with tight controls for fans of the bullet hell genre works out. The ship was easy to control and collision detection was spot on. This is essential in a bullet hell and it really leaves no one but the player to blame when they die. It also makes it that much more satisfying when successfully dodging a huge amount of attacks and taking down a boss.

Have I mentioned bosses yet? Dang, DeltaZeal really knows how to put them together. I mean for that the be taken literally. Almost every boss in the game is made up of multiple pieces that can be blown off of it. This results in the boss changing its tactics and the player getting an extra challenge.

You might be wondering just how long it’s going to take you to complete DeltaZeal. Top-down shooters aren’t exactly know for their length, after all. Well, a single playthrough will take roughly half an hour to complete. However, players will likely have to spend more time with the game so that they can get a feel for each stage to help them through it. Also, if players perform really well in a level, there’s a chance that they’ll be thrown onto a different path. There are multiple different splitting paths. Some can even lead players to completely different levels than what they’ve already been to. This gives the game some extra replayability for hardcore fans of the genre.

How players tackle all of these challenges is up to them. DeltaZeal includes three different types of shots that can be leveled up. There’s the laser shot, spread shot and homing missiles. Each of these have their own advantages and players can mix and match upgrades to best suite them. There’s also a black hole shot that is charged as the player kills enemies. Releasing it will deal massive damage to bosses and it also absorbs their shots, which can give the player a couple of seconds to breath during dire moments. Bombs can also be used to help defeat those tough bosses faster.

Knowing that DeltaZeal came out back in 2002 gives players a good idea of what they can expect for graphics. It’s all 2D, but there’s a lot of detail to be found. This is both a blessing and a curse. The high quality of the game’s graphics make it very beautiful, but can also get in the way. Sometimes the backgrounds in the game are just so detailed that it can make it very hard to track the enemies’ bullets, which can result in unexpected deaths that are sure to frustrate some players.

DeltaZeal also comes with a wonderful soundtrack for players to enjoy. Each level has its own music and they’re filled with energy. It really fits with the bullet hell genre. There’s also sound effects for gunfire in the game. This is loud enough to be noticed, but not so loud that it overpowers the music and grinds on the ears.

Overall, DeltaZeal  is an amazingly good top-down shooter. Those dedicated to the genre may blow through it quickly, but there’s still more to explore. Everyone else will be challenged to the best of their abilities. It’s got great art, but the high detail can sometimes get in the way. The audio in the game is also a treat.

DeltaZeal earns 4 GiN Gems out of 5!