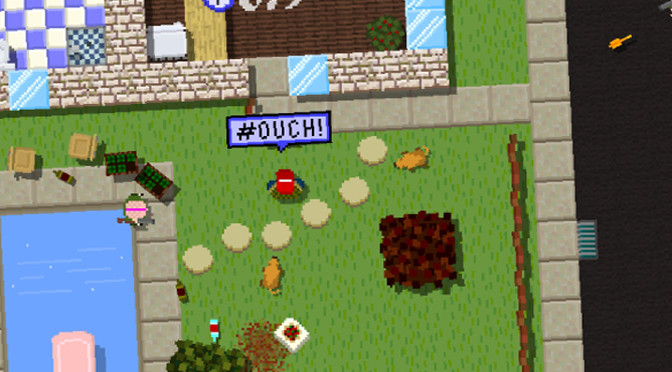 Do you wanna talk about World’s Fastest Pizza? No, I’m not actually talking about your favorite pizza joint, but rather a new game out on Steam.

World’s Fastest Pizza has a story that feels like taking an acid trip. Okay, I’ve never actually dropped acid, but from how I’ve heard it explained, I can’t help but feel the two are comparable. See, in this game you play as tortoiseman, and you’re job is to deliver pizza and make money so you can repair your ship and return to your home planet.

Honestly, the story of World’s Fastest Pizza is incomprehensible and this is due to the writing. It’s just all over the place with spelling mistakes, lack of capitalization, generic slang and more. It’s obviously done on purpose, as least I hope it is, but it still doesn’t make it any easier on the player. Even in its attempt to be funny or try to connect with the current generation with casual speak, I can’t help but feel like it misses the mark.

Don’t believe me? Check out a bigger version of that image to the left. It’s a screen-cap of the opening crawl in the game. Finish up with it and then report back if it gave you cancer or not.

Despite the completely whacked out story, there’s actually a really solid game to be had here. The concept of delivering pizza while in a top-down view is simple, but the challenges faced along the way make it much more interesting than it sounds.

There are several enemies and obstacles that get in the way of delivering pizza. Rednecks with guns, aliens and giant computer monstrosities are just a few that the player will run into, but tortoiseman can overcome them with the help of the various powerups that can be bought in the game. These powerups range from slowing time when bullets get close to the player, increasing max health, magic force fields, increased speed and more.

Buying upgrades will set the player back a pretty penny in-game, but they are so worth it. It feels really great to maneuver around a large group of enemies all firing at you due to the John Woo-like powerup that was purchased earlier and having super speed only makes it better.

World’s Fastest Pizza is also great at switching up gameplay to keep the player interested. Every once in a while, players’ fast-paced pizza deliveries through UFO infested deserts and beaches filled with crabs are interrupted by plain, normal, nothing-out-of-the-ordinary deliveries. This may seem really out of place at first, but it offers a brief reprieve from the fast paced gameplay and gives players some much-needed time to breath.

Another interesting section that I ran into while playing World’s Fastest Pizza was filled with sneaking levels. It involved taking power ups away for the time, but replaced them with loads of halls and enemies with guns. The goal here was to follow blood trails and deliver pizzas to severely injured people. It left me feeling like Solid Snake when I was done. If he got a job at a Domino’s right next to a torture camber, that is.

The graphics in World’s Fastest Pizza are weird. It looks like the developer drew everything in MS Paint while being inspired from your favorite cartoon show with awkward, but appealing, animation. It fits with the overall feel of the game and keeps elements of levels and enemies simple enough to identify during the frantic gameplay.

The audio in World’s Fastest Pizza is definitely entertaining. There are several tracks of totally upbeat and crazy music that easily matches the game’s already out there tone. There’s also solid sound effects throughout and a couple of funny bits of voice acting. However, the greatest part is easy the opening theme, which is a simple and goofy song about eating and delivering cheesy pizza.

The best thing about World’s Fastest Pizza is that it knows what it is. The game is short and simple, but random levels and the fast-paced gameplay make it fun to jump on at random times of boredom for a few minutes of play. It only costs $3, which is great! Too often I see games on Steam that cost $10 or $15, but are really only worth $5. I don’t mention price all that much in my reviews, but this is just one of those times where the developer knew exactly what they were doing and didn’t charge an arm and a leg for an experience that wasn’t worth that much, and I appreciate that.

Overall, World’s Fastest Pizza is a very entertaining game. My advice would be to skip the story and just enjoy the gameplay. While the general weirdness of the game could surely turn some people off, it doesn’t change the fact that there’s a good time to be had here, and that it won’t break the bank.

World’s Fastest Pizza speeds its way to 4 GiN Gems out of 5!