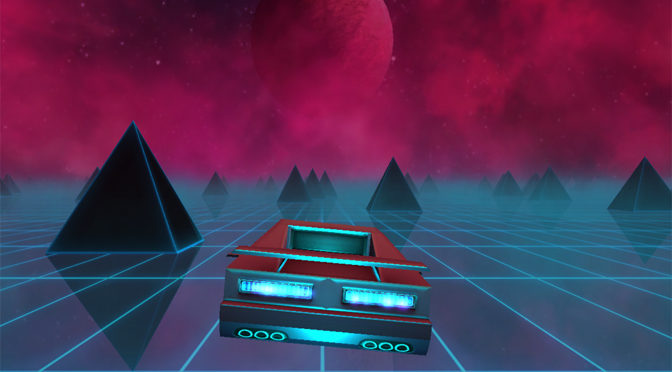 This week I spent my time with a browser game called Cyber Rider Turbo. There’s also a version of the game for Android devices, but I didn’t give it a try, so I can’t really say anything about it.

Cyber Rider Turbo is an endless racing game. It has players dodging obstacles to get as far as they can. The controls include using the arrow keys to direct the car. That’s really all there is to it. The player can move the hover car left and right, but can’t control its speed. However, there are other ways to alter speed.

While traversing the world of Cyber Rider Turbo, players will see triangles and circles among the obstacles. These are powerups that control speed. The circles will slow the player down and the the triangles will speed them up. Picking up the speed boost is much more dangerous, but it offers more points over the circles to slow the hover car down. Granted, there’s no leader boards or anything like that, which means the points don’t matter.

The environment that the player travels through in Cyber Rider Turbo will also change the further in they get. This isn’t major changes like it becoming a completely different world, but is rather introducing more difficult obstacles to dodge. This includes pieces of building laying across the ground, moving pyramids and more. It’s nothing major, but it does add some small variety to the game.

There also a random Credits stat that pops up in the game. There’s no way to get credits and it always just reads as zero. I don’t know if this has something to do with the mobile version of the game or not. It may just be part of a leftover feature that was cut from the final project. Either way, it’s a bit lazy to leave it in the browser version of the game.

The visuals in Cyber Rider Turbo are a treat. It has a very Tron-like feel to it. This is accomplished with the world and hover car being shades of neon blue. However, the horizon that the player is constantly driving toward is more red and purple in color. It works well with the game and looks nice. There’s also a full-screen option, which is great to see in a browser game.

The audio in Cyber Rider Turbo isn’t bad, but it’s not great. There is one song that plays the entire time and its an alright synthwave song to go with the visuals. However, it is a looping track. Unfortunately, its easy to hear when the track starts over, which kind of breaks the immersion. It also just feels a bit clumsy as well because of that break.

Overall, Cyber Rider Turbo isn’t a bad game, but it isn’t really good either. Just middle of the road. Check it out if there’s really nothing better to do, but don’t waste too much time on it.

One thought on “Dodging Responsiblity With Cyber Rider Turbo”