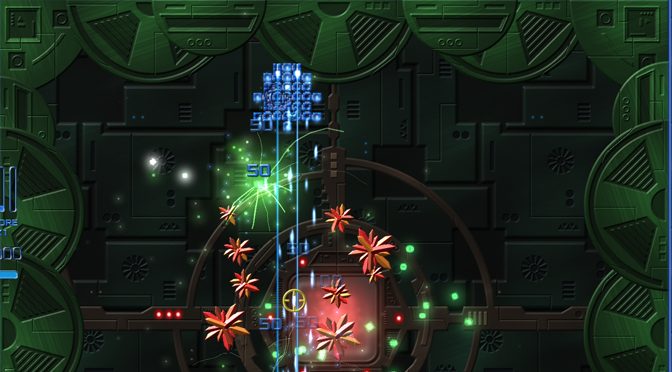 Remember when I said we would be taking a break from mobile gaming? Well here it is. This week’s game is Cuboid Keeper, which is a PC game you can pick up on Steam. I was given a code by the developer for this review. Just to be transparent.

Cuboid Keeper is a shoot-em up (Shump from now on) that has players taking on the role of a guardian for a mysterious cube. This cube contains a great secret of the universe that many want to know. As such, several different races try to enter the cube to gain this knowledge for themselves.

Cuboid Keeper takes place across a variety of levels all based inside the cube. Each of these levels has players fending off waves of enemies as they try to kill the player. This usually has the player battle in square arenas, but the game does like to mix it up some with unconventional levels. This even includes one that is more like a maze where the walls damage players.

There are 40 levels for players to go through in Cuboid Keeper and each one comes with additional story. I’m not going to say that the story in Cuboid Keeper is amazing, but it does have its neat moments. Players are also able to challenge the game on normal and hard difficulties. If you have experience with Shumps, then go on and tackle hard mode first. It has the advantage of earning the player the extra rewards from normal mode as well, which will help later in the game.

This is due to the game allowing the player to create their own ships. The player starts with a core and can build around it. This includes adding more health and weapons to the ship. There are also special modules that give different abilities.

The area that players can build their ship in starts out small. However, the player can expand this area with these yellow orbs they earn from beating levels. They get one orb for beating the level on normal and another for bearing it on hard. Unlocking more area to build in gives the player more room for upgrades, which is why starting in hard mode is a great idea.

The ships that players make in Cuboid Keeper won’t be overly complex, but they can be unique. This includes having weapons that only fire in certain directions, which can change how the player approaches certain battles. It also isn’t a bad idea to change around the ship’s setup if they player is having trouble with a certain boss or level.

One of the more interesting things about Cuboid Keeper is how it handles combat. Sure, it’s a lot of shooting, but there’s also a good bit of dodging as well. That’s because the ship changes into a glowing orb while not shooting. This makes it smaller and also increases its speed. The player won’t be any more invulnerable in this state, but it does come in handy for getting out of sticky situations.

The visuals in Cuboid Keeper are good. Even if the textures and objects in the game are a bit dull. The game makes up for this though by having lots of flashy explosions and action on the screen. Sometimes it can even be a little hard to keep track of the ship in all this action, but it isn’t too much of a problem with some practice.

The audio in Cuboid Keeper is also worth checking out. I won’t say it’s the best, but it fits well with the rest of the game’s aesthetics. At the least it never made me want to switch over to my own music. I know that’s not the strongest praise, but I do enjoy my shumps with heavy metal in the background.

Overall, Cuboid Keeper is a genuinely great way to waste some time. Shumps aren’t for everyone. I understand that. Still I can’t help but think that this game is one of the better ones I’ve played. What’s even more impressive is that this is the developers’ first game. It takes a good understanding of a genre to do this well. That leads me to believe that this one really loves shumps and I hope they keep it up. I want to see more of what they can do.