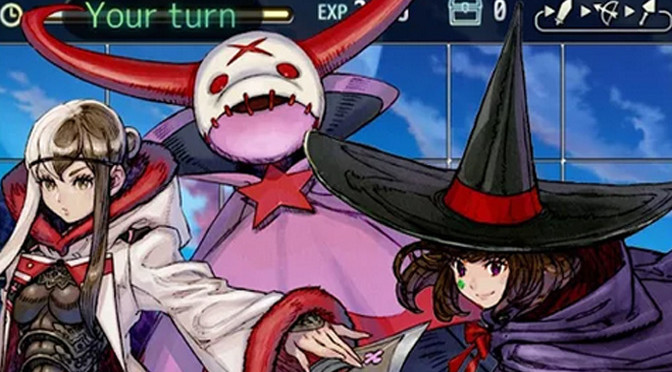 This week I got to do something I haven’t done in a really long time. Play a mobile game on my smartphone. I first jumped into the smartphone game about four years ago with my first phone: the LG Lucid. It lasted a long time, but in the last few months, it became incapable of doing much outside of Facebook and email. I finally put the poor thing to rest last weekend while I was out seeing Jurassic World (Which is great by the way) and picked up a Droid Mini.

With my new phone in hand, I already knew the first game I wanted to try out. This game is called Terra Battle. Anyone who keeps up with my posts here at GiN knows that I’m a huge fan of the classic Final Fantasy games. It just so happens that Terra Battle is made by Mistwalker, which is the studio ran by former Final Fantasy creator Hironobu Sakaguchi.

Terra Battle is a turn-based strategy RPG that follows the freemium model. I’m not a huge fan of this whole concept, but I’ve got to say that this game does it right. It costs stamina to take part in battles and stamina will regenerate over time. Players can also buy energy to refill their stamina for the typical ridiculous prices. However, the long-lasting battles found in Terra Battle mean that stamina has plenty of time to recharge while players are enjoying the game.

In my experience, I’ve found that I can put a solid hour into the game without having to worry about running out of stamina. This is plenty of time to put into a mobile game and energy is awarded each time a chapter is completed. This means that I’ve been able to put extra time into the game at my discretion due to hoarding energy. It actually makes for a game that doesn’t feel like it follows the freemium model.

As I said before, Terra Battle is a turn-based strategy RPG. The game has a strong focus on having characters team up to take enemies on. This means that players will have to do their best to make sure they position their characters on the opposite sides of enemies to attack them.

Moving characters around on the field of battle is strange. Characters don’t have a specific movement range, but there is a time limit to how long they can move before the turn ends. Characters can also slide into their allies to move them around on the battle field. This means players will have to make plans before moving so that they can position their characters on the field for optimal attacks.

Terra Battle also allows players to team up for co-op battles and can also fight against each other. There are also a series of challenges that players can take on to level them up between story missions. Other timed events show up on the map every day to give players a chance to increase their levels. Some are even designed to help boost the level of weaker characters.

Characters in Terra Battle are recruited from the tavern. The tavern is basically a hub that allows players to modify their teams and prepare for battle. Some characters can also have additional jobs assigned to them and have their DNA combined to create new characters with shared stats and skills. Players can also recruit Eidolons (Summons) to help them in battle and can level them up as well.

The overall story of Terra Battle is pretty generic. Players are on a quest to find the “Maker” and will meet up with various different races and uncover secrets that are hidden in their world. Like I said, it’s the basic fantasy story line.

The graphics for Terra Battle are the standard that you’ll see on mobile devices. There aren’t much in the way of fancy animations, but a simple user interface that makes the game easy to play is a blessing. I will say that the character portraits that are included in the game are appealing to the eye.

The audio found in Terra Battle is great. It’s strange to find good music in a mobile game, but this one has it. This is easily due to the fact that songs in the game have been composed by Kenji Ito, Yoko Shimomura and Yasunori Mitsuda. All of which have composed music for popular Square Enix games. There are even options for live versions of songs.

Overall, Terra Battle is an amazingly good mobile game and I’m so very glad that I’ve gotten the chance to play it. Frankly, I’m not done with the game yet, but mobile games are huge tasks that take forever to complete. I’ve got right around 10 hours into the game and I’m still loving it. The easy to control battle that make players think before they act is great. Also, the audio is wonderful and is one of the best parts of the game.