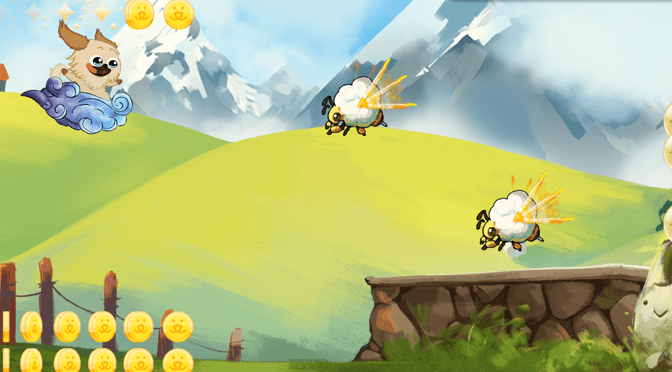 My time wasting this week is a little different than normal. No, I’m not covering something outside of video games. Rather, I’m looking at a video game that ties its gameplay into a charity. This game is Don-Ay.

Don-Ay is a game that is all about saving pets from pounds to give them a better life. The game encourages players to play with their pets, feed them and just take care of them in general. If that isn’t already a dead giveaway to what the charity behind this game is call about, then you’re on your own.

Charity is great and all, but I’m not putting on the kid gloves for Don-Ay. That may seem mean, but understand that it comes from a place of compassion. If the charity wants to raise money through a game, it must first make sure that the game is enjoyable. Otherwise, its efforts are wasted. 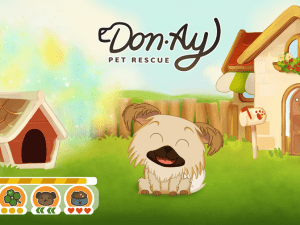 With that in mind, is Don-Ay a good Time Waster? I guess that depends on who you ask. Personally, I wasn’t all that drawn in by it. To be fair, I’m not much of a pet simulator guy in the first place. I had a Tamogachi and a Digivice (that I just put new batteries in) as a kid, but find the simulation genre a bit boring as an adult. However, that doesn’t mean I’m unfair in my reviews of virtual pet games.

On the flip side of that, I have a niece that I’m sure would love this game. Now I haven’t had a chance to get her honest opinions on the game, but I’ve seen her get incredibly immersed taking care of virtual pets in other similar games. So with that being said, I can see this game appealing to a younger audience.

However, I did say no kid gloves. Let’s get into the meat of Don-Ay. I already note that the main part of the game is taking care of a virtual pet, or multiples even, but that isn’t all. There are also the Dreamworld levels. These levels act as an endless scroller that has players dodging obstacles and picking up coins. There are also a few different power ups to help players along the way.

My biggest issue with this part of the game is the difficulty spike. The levels start off incredibly easy with next to no challenge. Despite this simple facade, the game starts throwing loads of obstacles at the player not too long into a run. The issue I have with this is the move speed of the pet in the Dreamworlds. The pet doesn’t move one-to-one with the player’s finger. Instead, it has a max speed that tops out for vertical movement. This means that there are quite literally times where the obstacles become impossible to dodge at no fault of the player. It’s a bit of a mood killer for what is supposed to be a happy game about saving pets. 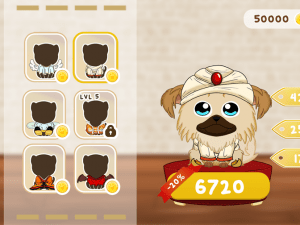 Listen, I get why the levels are designed like this. The developers can’t have players collecting lots of coins quickly. After all, players use these coins to purchase clothing and other accessories for their pets. These outfits aren’t cheap either, but that’s the catch. See, Don-Ay includes microtransactions just like any other modern smartphone game. It wants players to spend money on those virtual coins so they can buy all those different outfits and other upgrades.

It’s also worth noting that Don-Ay has more than its fair share of ads as well. Not only does the game include ads in between runs through Dreamworld, but it also has video ads available. It’s actually the video ads I take the least offense from. These are optional and give the player extra rewards for watching them.

What may be the worst ads though are the boxes that show up during runs in Dreamworlds. These ads show up in the bottom right corner and block off a section of the screen while playing. Even worse, trying to close the ad just takes the player to the typical “Report” or “Why this Ad?” box from Google.

Here’s the thing, I get that the money from these ads and the micro transactions are going toward a good cause, but how much of it is? I took a look all over the Don-Ay, Affinity Project and Best Friends Animal Society websites trying to find this out, but didn’t see it anywhere. I don’t actually know how much of the revenue this game generates goes charity, and that’s a problem for me. Add in the sketchy origins and rumors surrounding the Best Friends Animal Society (you can check those out for yourself) and I have a hard time giving a personal recommendation to the charity. 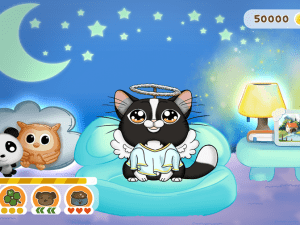 So I’ve spent a lot of time talking about negatives with Don-Ay, but I do have to note that there are some positives. This includes the overall presentation of the game. It has a nice crisp look and some solid audio. That includes entertaining enough music, but also some slightly annoying voice acting for the pets. Then again, kids might find those high-pitched whines adorable.

Overall, Don-Ay is a bit of a mediocre game that doesn’t stand out in any way. It seems to be relying off of the charity idea to make unique, but the rule is always to think about what the consumer wants first. I didn’t even get into the crashes or other problems I had while playing the game that may be due to my device or operating system, but they were there. Plus, I’m really not keen on knowing so little about how much of the revenue from the game goes to charity.