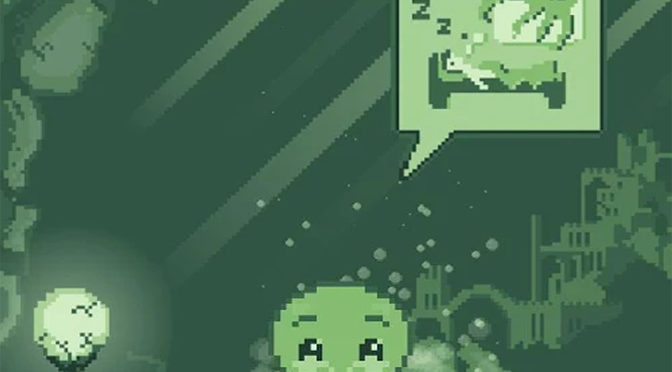 Over the Christmas weekend and throughout this week, I spent my time with Cthulhu. Specifically, I raised my very own little Great Old One into a horrible monstrosity in the Cthulhu Virtual Pet app on my smartphone.

Cthulhu Virtual Pet is a simulation game that plays much like the pet raising games of old, such as Tamagotchi or Digimon. This means that players will spend time feeding, cleaning up after and playing with their own baby Cthulhu.

As with all digital pets, the goal in Cthulhu Virtual Pet is to raise the cosmic entity into adulthood. Feeding and training Cthulhu takes coins. The game starts players off with a good amount of coins and more are easily earned through the various minigames that players can challenge.

There are seven total minigames for players to enjoy in Cthulhu Virtual Pet. None of them really have an end, but they reward players with more coins the further they get in them. There’s one that is a rogue-like, another that has the player dodging and collecting items and more. Non of them are particularity complex or hard, but they are a good way to kill some time.

Just like with all virtual pet games, Cthulhu Virtual Pet isn’t for the impatient. It takes time to raise Cthulhu and players will have to check back in on him periodically to make sure he is happy. There is also a deep sleep mode that freezes the game. This feature is for times when the player can’t load up the app to check on their pet. I’ve used it a couple of times myself when I felt like taking a  longer break from the horrors of virtual pet raising.

One of the ways to make raising Cthulhu easier is to keep his witnesses alive. The players starts with 10 witnesses in Cthulhu Virtual Pet. Each of these act as worshipers of Cthulhu and make it easier to raise the virtual pet to his next stage of life. If Cthulhu becomes upset because the player isn’t paying enough attention to him, he will eat one of the witnesses. Players can also name the witnesses, which of course means they should name them after friends and family.

The graphics in Cthulhu Virtual Pet are great. There is a lot of detail to be found in the game. However, it still keeps the same basic interface that digital pet games of old used.

The audio in Cthulhu Virtual Pet is also great. Screams of terror when making a sacrifice, roars when destroying a city, it all sounds good. It also has some catchy background music.

I’ve realized something about myself in this last week, and it’s that I don’t really enjoy virtual pet games anymore. As a child, I loved playing with my Tamagotchi. I also had one of the Digivices that let me raise my own Digimon. However, I can’t really say this is for me anymore. To put it simply, I just don’t have the patience for it. However, that doesn’t mean that I’m saying Cthulhu Virtual Pet is a bad game. It’s very solid and has a lot of polish. The graphics are great and the audio is on the same level. Check it out if raising a mini god of destruction sounds like your thing.