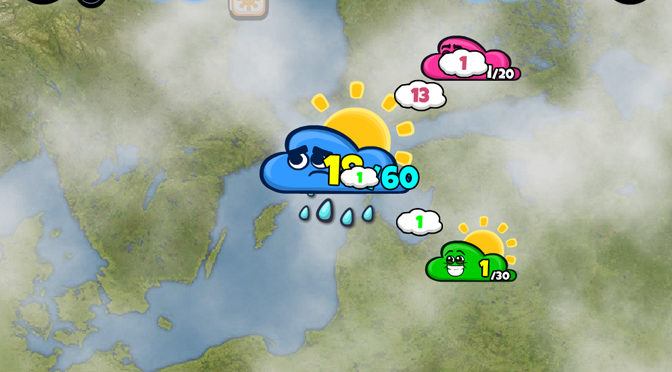 My adventure around the internet this week brought me to browser game titled Cloud Wars Sunny Day 2. This is my first experience with a game from this series, kind of. At least, it was the first one in the series I played. That may lead you to believe that I enjoyed it so much that I went back to play the others, but that just isn’t the case.

Cloud Wars Sunny Day 2 is a strategy game that has players trying to take over the skies with an army of clouds. The levels are basically set up of player clouds, enemy clouds and neutral clouds. Clouds have health points that slowly regenerate as time progresses. When choosing to attack another cloud, it will usually be for half the value of the allied cloud’s current health.

There are also different powerups for clouds that players can activate. This includes rain, sun and lightning.  Rain increases a cloud’s total health, the sun will make them regenerate health faster and lightning causes the cloud attacks to move faster. There’s also a large sun power that can be used to restore all clouds’ health faster for a limited time. The powerups are accessed by sending clouds to pick up stars that appear on the map.

The general idea behind Cloud Wars Sunny Day 2 is good and the elements it uses make for a decent strategy game. However, it’s really how the game plays that makes it clunky. Players click and drag lines from clouds to attack other clouds. This can also be done to send health between allied clouds. Unfortunately, the controls just don’t feel all that responsive. There always a little bit of lag in everything that it makes it annoying. Heck even the levels for this browser game take a good 10 to 15 seconds to load, which is way too long for what the game is.

Like I said above, Cloud Wars Sunny Day 2 is my first experience with the series. It’s also an indie game, which means it gets a little more leeway, but there’s a problem with that. See, I went back and checked out the first Cloud Wars Sunny Day. I just wanted to see what kind of changes had been made to the series over time. It’s a bit of a hobby of mine, which is one of reasons that I really enjoy playing retro games or starting a 15-game series from the beginning even if the stories aren’t connected at all. What I learned about the Cloud Wars Sunny Day series is that it actually got worse over time.

Playing the first game in the Cloud Wars Sunny Day series gave me an idea of what happened to the series right from the get go. For example, the title screen for the game features nice crisp images of the various clouds that fight in the game. In comparison, Sunny Day 2 had a title screen with images that have jagged edges and are just blown up versions from the first game’s title card. It’s really just reused assets that haven’t been used properly. Plus, the first game didn’t show signs of lag like Sunny Day 2 does. It’s really just that the developer got lazy and put out the same game again with very minor changes, and somewhere along the way screwed it all up.

I guess I’ve basically already covered the graphics in my complaints haven’t I? Well, just know that the game features a single song that loops the entire time and isn’t something worth remembering.

So, there it is. Cloud Wars Sunny Day 2 isn’t really worth playing. It’s a bit of a mess with its unpolished gameplay, audio and graphics. I can’t really recommend it at all. On the other hand, it might be worth your time to visit its older brother.