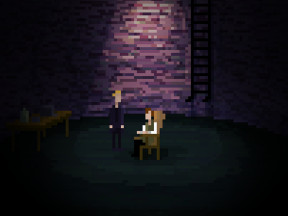 I’ve got no more excuses left in me and I’m ready to give my review of The Last Door Chapter Four: Ancient Shadows. I’ve been following this series since Chapter One and I’ve got to say that it feels like I’ve been waiting such a long time for the season finale.

The Last Door Chapter Four: Ancient Shadows picks up where Chapter Three left of, kind of. The game opens with what I can only assume is a dream sequence, maybe. Truthfully it’s somewhat confusing. With how Chapter Three ends and what’s learned in Chapter Four, I really started to wonder if I haven’t been playing a character that is stuck in a dream or some kind of hallucination.

If it sounds like I’m a little confused about the story, well, I am. Despite Chapter Four being touted as a season finale, it’s honestly just another episode in the series. I felt like I was going to get some kind of insight as to what’s been going on, but I was left with a cliffhanger and more questions just like in previous chapters. This doesn’t mean it isn’t a good episode. In fact, I think this is probably the single best episode in the series, but I wouldn’t call it a season finale.

Gameplay in Chapter Four has remained mostly the same. There are puzzles to be solved and Devitt is the only one who can do it. Chapter Four featured a lot of the same type of puzzles found in Chapter One and Two. These aren’t bad puzzles by any means, but I was kind of hoping for something new and interesting like what Chapter three gave me. Still, the puzzles are really solid and are a great way to flex one’s mental muscles.

Another small complaint is that Chapter Four only lasted me for about an hour, which s easily less than any of the other chapters. What’s with all my horror games cutting me short (I’m looking at you Walking Dead)?

The audio in The Last Door Chapter Four: Ancient Shadows is hands down the best in the series. Walking through a creaky, old mansion and hearing footsteps come from the floor above was easily one of the most terrifying moments in the game. Chapter Four is also filled with wonderful music that does a perfect job at capturing the mood. After three episodes of work, the guys at The Game Kitchen have perfected the atmosphere in The Last Door series with Chapter Four.

I absolutely loved my time with The Last Door Chapter Four: Ancient Shadows. Despite the somewhat confusing story and lack of feeling like a true season finale, I couldn’t help but be drawn in by the game. Chapter Four was a little on the short side compared to previous chapters, but it made up for this with a stellar atmosphere that is easily the best the series has had to date.

I can’t wait for Season Two to start this summer!