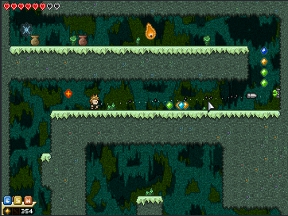 or maybe just the middle

I was actually able to drag myself away from Magic: The Gathering’s new set release this week just long enough to enjoy some browser gaming (and to write this article, but only just barely). So what did I play? An interesting game called Diamond Hollow 2.

I can’t say that I ever played the first Diamond Hollow but from what I got from this one I don’t think I needed to. The game starts out with our hero waking up miles below the Earth’s surface. Uncertain about what he should do a talking gun offers to lend him a hand. Yes, the chatty sidekick in this game is a gun. This is still not too strange. What is strange though is why our hero was put into this pit.

Evidently the local scientist had nothing better to do so he thought "Hey maybe I should throw this kid into a horrible pit filled with monsters and mutants that are the side effects of my scientific research and see how he holds up?" Yeah, that’s a little creepy. I suppose it could have been worse, but not by much.

As our hero travels up and out of this hollow he’ll collect…yup you guessed it, diamonds! These diamonds are used to upgrade different attributes of both our hero and of his chatty gun. Along the way though he’ll find other upgrades. These are pretty basic upgrades like a spread shot and double jump boots.

To go along with these upgrades the monsters will also be getting stronger as we go along. No upgrading a gun to tear through an enemy. Instead we find that the creatures still put up a mild challenge all the way through the game. This is a nice touch as most games of this type are okay with letting the main character get immensely more powerful than the basic creatures. Sometimes it gets bad enough that the game turns into a run and gun instead of a platformer with shooting. Kudos to Diamond Hollow 2 for keeping the difficulty in check.

At the end of every level our hero faces off against a boss. These battles are dang hard! Sure the bosses themselves aren’t amazing but the environments around them will own our hero more often than any of us would like to admit. For example, when fighting the first boss it starts out very basic. He is a big slime that oozes across the floor at you. The change comes when we lower his first health bar. Now we have small versions of the boss being spawned and shots of fire coming at us from turrets that are now positioned on the walls, ceiling, and floor. Also the boss speeds up and is now randomly jumping. This can lead to some very hectic battles as our hero ducks, weaves and jumps over obstacles while trying to shoot the boss.

Another small note about Diamond Hollow 2 that I’d like to toss in is that it has a very nice soundtrack. There are only two songs in the whole game but for every level these songs are remixed. The slight variation of music from level to level left me with something I enjoyed and though fresh. It was a neat idea and I can easily say I’d like to have the audio to throw on my PSP for those perfect moments when I’m getting speeches from my bosses (Hi Nate! Hi John!). Sure you laugh, but how freaked out would you be if when your boss went to give you a lecture One Wing Angel started to play in the background?

If there is one drawback to Diamond Hollow 2 it would have to be just how long the levels are. I’ve found that it takes about 15 minutes to complete a level. Taking into account that there are seven levels this gives us about two hours of gameplay (not to mention all the mini games and extra modes). So while it’s a good game to play if it’s your day off or a long (very long) break between classes I can’t actually recommend it as a quick gaming fix.

Overall Diamond Hollow 2 is a great game to waste time on and while it does require more dedication than the average Time Waster I still believe it is a good game to play…if you have the free time.

Diamond Hollow 2 mines itself 3 GiN gems out of 5!