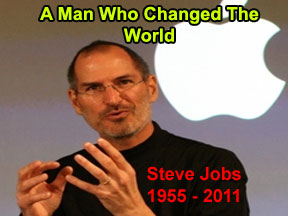 Whether you’re an Apple lover or not, the loss of Steve Jobs, co-founder of Apple, is a profound one and should all make us stop and think about how he’s changed our lives.

Jobs will be remembered for his vision. He wasn’t an inventor. He didn’t invent the mouse, but he packaged it and brought it to us and now we wonder how we could live without it. That is until he brought us touchscreen. I mean, how clumsy the mouse seems now we can use our fingertips.

Jobs understood products and most importantly he understood users. He knew when to push the envelope and when to hold back. He was the master of modern marketing and gave us products we didn’t even know we needed. The iPad is a prime example of this. It doesn’t do as much as a laptop can, but we all want one, so those little no Flash, no keyboard niggles become irrelevant.

One could argue that Steve Jobs hasn’t played a major part in the games industry. Whilst Apple has never really courted the games industry, the iPhone and latterly, the iPad have opened up a whole new world of gaming. They may not be standalone portable gaming devices, but the fact that millions of the things are flying into peoples’ hands every year, combined with the healthy sale of games through the Apple App Store, make it a serious force. The success of games like Angry Birds has left the industry wondering how to get a slice of the Apple pie, and I suspect that games will be very firmly in Apple’s future.

But whether or not the iPhone is a threat to the handheld console market or the latest Apple products look to focus on gaming as a key feature, we can’t deny that Jobs has made everyone a bit of a gadget geek. From the Macbook, the latest iPhone or the iPad, Apple owners can’t help but rub their hands with glee and evangelise. It’s a testament to Jobs, his attention to detail and his uncanny ability to know what people want before they do, that means people now love their phone or their computer like never before.

It is very sad that such a visionary has been taken from us so early. We can only wonder what he may have come up with in years to come. A huge loss – RIP Steve Jobs.

The games industry is paying tribute across the web today. I shall leave you with some tributes from industry figures in Japan, kindly translated by Febriani Sihombing, Gameindustry.com’s Asian Markets Correspondent.

"I have been using Mac since 1995. I always chose Mac for an editing tool. MP3 is Mac. Mobile is Mac. I always use Mac for home, work and hobby. Otakon started to use Mac from MGS4. I have been living with the apple."

"The world lost a creative leader. My condolences."

"Without Apple computer, my music would not exist. Steve Jobs RIP."

"Mr. Jobs has passed away! I will try to do my best so the world wouldn’t be bored even if you’re not here with us. Good bye. And Thank you."

"He worked until his very last. I feel so sad. But thank you. Apple.com and Steve Jobs."