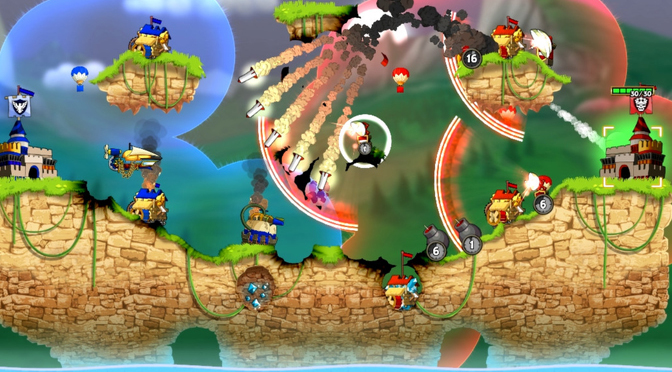 Can I just start this off by saying we live in a unique time as gamers. The indie scene has blown up over the last few years and it’s great to see developers getting their games released without publishers. We’re also seeing developers takes genres we know and love and mix them together to create new, interesting titles. This includes games like Destiny, League of Legend and Cannon Brawl.

Just in case the title of this article didn’t make it obvious, Cannon Brawl is the game I spent my time with this week. It was just released on Steam yesterday, but I’ve been privileged enough to be able to play it for a little over a week now.

Cannon Brawl takes the artillery genre and mixes it up with elements of a real-time strategy game. It’s like GunBound meets Command & Conquer. The game offers players several different modes of play. This includes a Campaign, battles against AI and multiplayer.

Battles are fought on a 2D field in the same manner as other artillery games, such as Worms and GunBound. However, whereas normal artillery games run on a turn-based system, Cannon Brawl removes this in favor of actions that occur in real time. This takes a genre that typically has a lot of hurry up and waiting to it and makes its fast paced and exciting.

Players start matches in Cannon Brawl with a home base a little else. They can use mines on top of gold and diamond deposits to increase the rates at which they earn money. This in turn allows them to buy and upgrade units faster. However, players can only build within their territory. A player’s territory can be expanded with buildings and balloons.

Units in Cannon Brawl that have an activated action, such as cannons, lasers, shields, etc., have a cool down timer to let players know when they can be used next. This allows players to fly around the field in their airship and handle tasks like setting up and upgrading units while cool downs are on.

Speaking of airships, there are several different ones that can be used in Cannon Brawl. The game starts players out with the Princess and her airship, but more are unlocked as the Campaign is completed. Additional airships can be purchased from the game’s Armory via experience points collected from battle. Each airship has its own unique talent that adds to the game. The Princess’s airship reduces cool downs by 15%, the Prince’s heals nearby units and the King’s airship creates a shield around itself that can be used to block enemy attacks on units. There are a total of 10 airships at the moment and more are coming.

Like with most artillery games, players aren’t limited to just shooting straight at each other to win matches. The terrain in the game is completely destructible, which allows players to destroy land under their opponents to send them falling to their deaths. Another unique element of the game comes from shields and lasers. Shield will deflect a laser shot if fired at. However, this can actually get the player an angle for a shot that they couldn’t have normally made. There are even puzzle levels in the game that highlight this feature.

The Campaign in Cannon Brawl puts players in the role of a Princess that uses her airship and units to take on her evil Uncle after he kidnapped the King in an attempt to take over the throne. Yeah, the story is a bit generic. There are 20 story missions to be played in this mode and 10 additional puzzles levels. The Campaign acts as a giant tutorial for players and also helps them unlock new characters and units to use in combat. Once this mode is beat, a Nightmare version of it is unlocked.

The Nightmare campaign is where players will really find the challenges they are looking for. Players start the story off with everything they’ve unlocked in the previous campaign. This doesn’t lead to an advantage though because the AI also has a huge arsenal at its disposal. Whereas I breezed through the normal campaign without trouble, I had to fight tooth and nail for my victories in Nightmare mode. Even then, Nightmare mode is only tempering players to take on the other modes.

Players can test out strategies and train against tough enemies in the vs. AI mode of the game. It work similar to the skirmish modes found in many RTS games. There’s plenty of challenge to be found for players in this mode with the ability to take on AI ranging from an “Easy” difficulty rating to an “Intense” difficulty rating.

The multiplayer of Cannon Brawl is where I imagine the majority of players will spend a lot of their time. Players can jump into ranked and unranked matches with the leaderboards for the ranked matches being displayed for all to see. Players can also challenge friends directly, which is one of my favorite features. The multiplayer also has an option that allows players to take each other on in 1 vs. 1 local matches. I love the addition of local multiplayer as it makes for great moments when couch gaming with friends.

The graphics in Cannon Brawl are crisp and clean. It’s all 2D drawings that have a nice flavor to them. I enjoyed some of the character designs in the game, but others just came across as generic. The environments in the game don’t have a lot of detail to them, but I can’t really blame the developers for not wanting to add much. After all, a good portion of the terrain is going to be destroyed during battle.

The audio in Cannon Brawl fits the game nicely. Combat is accompanied by the appropriate sound effects, but there is no voice acting. The music in the game is nice to listen to, but it’s by no means a masterpiece.

Overall, Cannon Brawl is a wonderful experience that should find its way onto everyone’s computer. The game is $15 on Steam and there’s even an option to buy a two pack of it for $20. The price is easily worth it for either option as players will spend several hours on the Campaign and even more with the multiplayer.