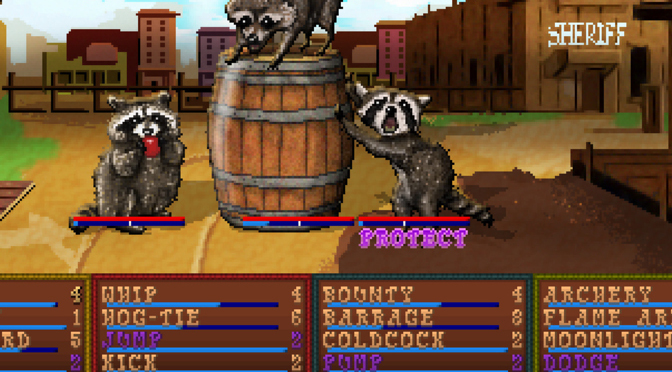 Alright, this was actually supposed to be last week’s time waster, but I ended up delaying it due to the release of The Last Door episode 5. It just seemed like a good idea to do a spooky game for Halloween. However, now that that’s all said and done, I’m really excited to talk about Boot Hill Heroes!

Boot Hill Heroes an RPG that takes several elements from some of my favorite games in the genre and mixes them together. It has obvious inspiration from Chrono Trigger, Earthbound and the Final Fantasy series.

The story of Boot Hill Heroes starts with the Sheriff of an old west town having a standoff with members of the Saints-Little Gang. The sheriff is a no killing kind of man and his efforts bring in the leader of the gang save the town, but at the cost of his life. Fast forward a few years and players are put in the role of Kid, the sheriffs son. The Saints-Little Gang hasn’t made trouble since their boss was captured and Kid has gone to town to get a job and help support his mother. Along the way, he gets roped into a series of events that have him and three others tracking down the remaining members of the Saints-Little Gang that have started their old shenanigans again.

The gameplay of Boot Hill Heroes is somewhat hard to explain. Not the navigation of the world or anything, this is all basics that RPG players and most video game players have known for years. What I’m talking about is the combat.

Combat in Boot Hill Heroes take an Earthbound/Dragon Warrior view in that it focuses on the enemies and doesn’t show the player’s characters. There’s also a bar that build up over time and allows characters to attack. However, unlike Chrono Trigger and Final Fantasy, the bar doesn’t have to be full for an attack. Instead, players choose one of four actions from their command menu and each of these actions have different costs to complete.

Speaking of these actions, they are another unique part of Boot Hill Heroes. Each of the four characters in the game can have four different actions on their battle menus. These actions are obtained by wearing different hats. Various hats are found throughout the game and wearing them in battle will earn the player experience toward learning that hat’s unique ability. The different hats also show up on the characters’ sprites.

Another thing that I loved about combat was the dialog. This is yet another part of Boot Hill Heroes that takes inspiration from Earthbound. Rather than just fighting typical enemies, players will combat what could be considered normal people. This includes “Rebellious Youths” that are fighting against authority. Beating these youth will be a “positive influence” on them. There are a lot of small bits of text like this in battle and it added to the game’s charm.

There’s also an option to allow up to four people to play the game at once. This lets each player control their own character in combat. It might not be for everybody and honestly, I can’t see it getting much use, but it is a nifty addition to the game. I could see it being helpful with managing what can become hectic combat.

The graphics in Boot Hill heroes are actually what sold me on the game. I saw it when it came out of Steam and immediately thought “This looks like Earthbound in the wild west!” I wasn’t wrong and while a game shouldn’t be bought based on its appearance, that’s exactly what I did (Okay, I did at least check to make sure it was an RPG). One part of the graphics that was really neat were the battle portraits. I call them portraits because they had an obvious 2D look to them. Every time an enemy was defeated, they fell over like a target in a shooting gallery.

The audio in Boot Hill Heroes is great. The game does a great job at capturing that old school feel and it does it with a perfect western blend. This shouldn’t really come as a surprise being that the game’s soundtrack was composed by the same guy that composed Shovel Knight. Sound effects in the game were also spot on and really added to the wild west feel with sounds like gunshots and the hooves of horses on a dirt road.

Overall, I was really satisfied with Boot Hill Heroes. The game is $9 on Steam and it’s worth every penny. One small notes for potential buyers: this is only the first third of the game. Boot Hill Heroes is split into three games that will tell all of Kid’s story to capture the Saints-Little Gang. This entry in the series basically sets up what will become the grand adventure. The Steam pages doesn’t do a very good job of making this clear.