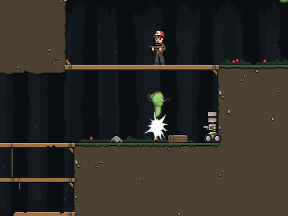 This week I didn’t have anything waiting to be played and instead took to the internet to find something. In my adventures I discovered A Ghostly Journey.

A Ghostly Journey is a puzzle/platforming game that puts the player in control of a ghost that feels he should leave the graveyard. Our ghostly friend explains that he feels something pulling at him and that he need to find out what it is. I completed the game and I’ve got to say that I didn’t really understand the story.

Those who don’t want any spoilers should skip these next two paragraphs.

The game progresses until the player has brought the ghost to a suburb area. Along the way the ghost will comment that he is starting to remember more. Once the final level is complete, the ghost discovers his house from when he was alive, says he remembers everything and goes inside. Inside is a boy hook up to life support. He flat lines and a few second later a yellow ghost comes out of him. The two ghosts come together and the screen fades to black.

That’s it. There isn’t any other kind of explanation as to what happened. At first I thought it was going to be a typical Ghost Dad (does anyone remember this movie besides me?) story about an out of body experience, but the yellow ghost just threw that whole theory right out the window. Surprising your player with a twist at the end isn’t a bad idea, but without proper explanation it can just leave that twist seeming very out of place.

Gameplay in A Ghostly Journey is really solid. Players control the ghost with arrow keys and can press space to possess people and animals. Using possession to solve puzzles is really where the game shines. There are several different type of people to posses and each one has their own unique abilities. Skills obtained by possessing different people include being more athletic, wielding a gun and being resistant to possession. Players will use these abilities to traverse areas and solve puzzles. The game relies heavily off of jumping out of a person’s body to get an extra jump. It kind of reminded me of Klonoa games, minus the large ears.

One thing I will say is that A Ghostly Journey, despite its appearance, is not designed for casual gamers. Early levels of the game are easy enough to complete, but once players start getting into the late teens the difficulty really ramps up. There also isn’t a lack of levels in the game. The game sports 29 story levels and an additional 14 levels for those looking to test their abilities.

Another element to A Ghostly Journey is collecting lost souls. There are 35 total souls to be found in the game, but I didn’t collect them all. I did see a gate that required all the souls to open, but I just didn’t have the desire to do it. This was partially due to the game not telling players where missing souls are. The map screen only indicates how many souls have been collected out of the total and I didn’t want to go through every single level again just to find the ones I’d missed. If the main map would have showed where missing souls were, I probably would have collected them all.

A Ghostly Journey has some simple, but very cute graphics. The appearance of the game would make one think that it is focused toward a casual audience, but as I’ve stated above, this is not the case. This doesn’t mean that the graphics are bad; it just means that they are somewhat misleading.

A Ghostly Journey also features some very nice audio. Most of the music in the game is made up of soft melodies that are great to relax to. I found that this helped me get past harder areas in the game because it didn’t rush me and left me relaxed despite repeated deaths.

I like A Ghostly Journey. It’s a simple concept that leads into a puzzle game. The story is a bit whack and the steep difficulty level part way through the game will probably turn off more casual players. However, it does have some simple but nice graphics and a really relaxing sound track.

A Ghostly Journey earns 3 Gin Gems out of 5!