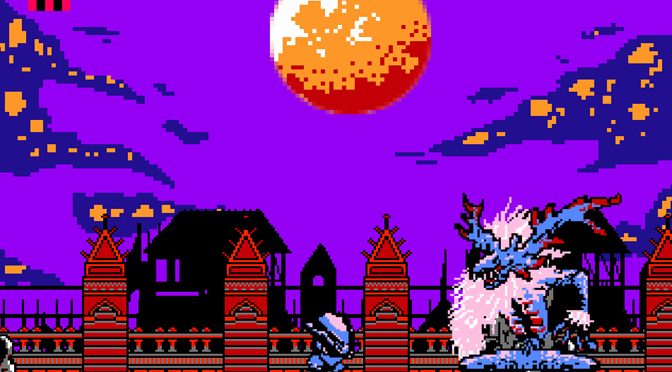 You may remember that I looked at a demake of Resident Evil 4 a few weeks ago called Bio Evil 4. It was a lovely demake that I deemed worth spending time on. That inspired someone to create another demake, but this time it’s of Bloodborne. The result is Bloodborne NES.

Bloodborne NES is exactly what the name implies. It’s a recreation of Bloodborne, a PS4 game, but in the style of the NES. This means that the gameplay is much simpler, as are the graphics. Honestly, this whole idea is great to me, but the execution of this demake doesn’t quite do the idea justice.

Let’s start off with the good, so as not to sour the review to early on. Bloodborne NES works hard to capture the Bloodborne feeling. Players are given the Saw Cleaver and are sent off to fight through enemies. The Saw Cleaver itself is nice, with a small bit of delay to its strike that requires a bit more precision. Players are also given a Hunter Pistol as well. Just like in Bloodborne, this weapon can stun enemies, making them easier to strike with the Saw Cleaver.

Keeping the stun mechanic goes a long way toward making Bloodborne NES feel like a proper demake of Bloodborne. The mechanic even works during the game’s single boss fight against the Cleric Beast. Not only will it stun the boss if the player hits them at the right time, but it will also allow the player to deal more damage, which is akin to Visceral attacks from the original game.

Another interesting design choice is how health and healing are handled in Bloodborne NES. The game drops Blood Vials in favor of regenerating health. However, health doesn’t just regenerate on its own. Instead, players gain back a single bar of health for each enemy they kill. The player only has three health in total and most attacks deal two damage. That means players have to be careful about how they move forward.

The visuals of Bloodborne NES are also a wonderful treat. The game really does look like an NES version of Bloodborne. This includes keeping a few different enemy types from the main game, but giving them NES sprites instead. It also looks like the game does a faily good job of following the NES color palette, but I won’t claim to be an expert when it comes to this type of comparison.

Moving on to the audio, its solid. 8-bit versions of two songs from the original Bloodborne play throughout the game and give it the appropriate unsettling feel that it needs. The sound effects also serve the game well by matching closing to those from other NES games.

All of this sounds great, and it is, but there are lots of other problems that drag Bloodborne NES down. Let’s start with the game’s controls. For some reason, the game doesn’t tie the shoot button down to a single key. Instead, it requires players to hold the W key and press the K key. I assume this is to mimic the NES controller’s two button layout, but it’s annoying. It also doesn’t help that the game feels a bit unresponsive. There were plenty of times during my playthrough when I found my character not jumping over pits, despite me pressing the button.

Another complaint I have with Bloodborne NES is the hit boxes. They feel rough to say the least. Sometimes and enemy hits me, sometimes they don’t. It isn’t clear where the boundaries between danger and safety lie. That alone is a major black mark on this demake.

Finishing up my complaints is the actual levels in Bloodborne NES. The game loves to throw cheap enemies at the player that there is no way they could have seen. I’m not denying that the original Bloodborne has a few surprise enemies, but the game is much more fair about it and not near as punishing as this demake. There are also just plain collision problems with the enviroment. Such as not being able to walk all the way up against a wall, or glitching through walls and floors that should be solid. It’s a bit of a mess on top of an already rough play experience.

Overall, I don’t find the Bloodborne NES demake to be worth the time to check out. Sure, the sprite art is nice and the music is good, but it doesn’t justify pushing past the other problems that this demake has.