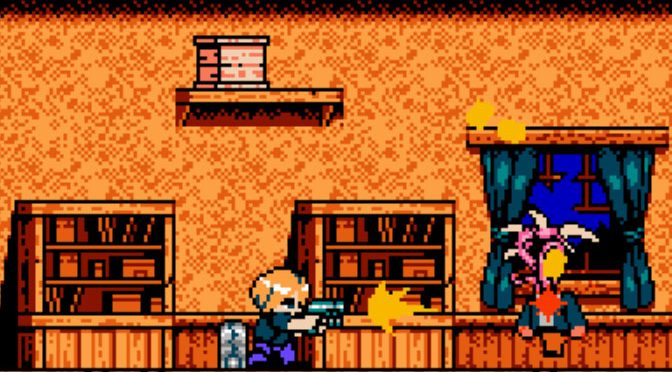 At this point, you’re probably already wondering why Bio Evil 4 sounds familiar, or maybe you already know where this review is going. In that case, it really is as grand as you think.

Bio Evil 4 is actually a demake of Resident Evil 4. The name comes from both the English and Japanese names for the game. The series is obviously known as Resident Evil outside of Japan, but in its country of origin it goes by Biohazard.

This specific demake of Resident Evil 4 takes the game back to the NES era. It’s not just the gameplay, but also the story that gets this treatment. Rather than a strong narrative, players are just dropped into the game and progress forward. The goal is still the same as in the original game, but there’s basically no exposition or character moments. Honestly, that’s completely fine with me. Helps give it that NES feel.

As far as the gameplay goes, Bio Evil 4 is closer to another Capcom title that actually was one the NES. That game is Ghosts ‘n Goblins. Anyone familiar with that game may be cringing at the thought of playing through a game similar to that, but there’s no need to worry. While I won’t deny that Bio Evil 4 is difficult, it is nowhere near as hard as Ghosts ‘n Goblins.

Bio Evil 4 emulates the NES era by turning the game into a 2D shooter. Players control Leon as he fights his way through hordes of enemies in an attempt to save Ashley. Leon has his trusty handgun for the task. Luckily, it has unlimited ammo in this demake. That’s good because the game loves to endlessly spawn in enemies. There are also some enemies with fixed placement as well, and boy is it always in the most annoying of places.

Leon isn’t rocking much else in the way of utility. He has no other weapons available to him and his signature knife is missing. However, out hero can jump this time around, which is a necessity for getting through this game.

Bio Evil 4 also sprinkles in some other fun bits from Resident Evil 4 that I’m sure will make fans happy. One such thing is the typewriters for saving the game. These have the same basic purpose here by acting as checkpoints for the player. There’s also gold to collect for the high score, as well as green herbs that will heal the player.

Bio Evil 4 isn’t overly long. There are two main areas to the game and then a boss. After this, Leon saves Ashley and the game ends. This being a Resident Evil 4 demake, it doesn’t do so without showing the player some statistics and then giving them a final ranking. Yet again, this is another nice touch from the developers.

The visuals in Bio Evil 4 really do look like what Resident Evil 4 would on the NES. It’s even easy to recognize many of the Las Plagas  their NES forms. The care of detail here is great for fans and really does a great job of hitting both the NES and Resident Evil 4 nostalgia buttons at the same time.

As far as the audio goes, there were definitely some liberties taken with the music. Yet again, this is fine by me. Resident Evil 4 music is more atmospheric and wouldn’t fit as well with the type of gameplay that the demake uses. The sound effects are also great and have that classic NES feel to them.

Overall, Bio Evil 4 is a fun little experience for fans of Resident Evil 4. I can’t really say it holds up without having played the original game, but that’s kind of the point. If you’ve played Resident Evil 4 then go check this out. If not, then go play Resident Evil 4. Once you’re done there you can give this demake a look.