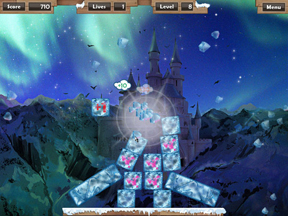 I think that lately casual games have been popping up more and more than serious games have been for me. This probably has something to do with their ability to make me lose track of time with little effort on my part. Shooting Blocks is one example of a good game to get lost in (for the most part).

The game is really simple. Here are stacks of blocks. Destroy the clear blocks without letting the purple blocks fall off the level. Sounds like an easy enough task right? Well for the most part it is. Each level has multiple ways it can be completed. Most of these ways will lose you a purple block or two, but there is always a way to minimize those casualties.

This is part of the fun with Shooting Blocks though. Sitting around and trying to figure out exactly which way will give you the best results. Sure here and there you’ll probably give in and just take a few losses, but it’s no big deal, or at least it shouldn’t be.

The main flaw with Shooting Blocks is the lives system that it uses. For each purple block lost you will lose a life. Yet again this doesn’t seem like a big deal. That is until I tell you that your base amount of lives doesn’t change from level to level. Instead the developers thought it would be a good idea to have your lives as one total sum for all levels. Sooner or later you will run out of lives after losing one or two every couple of levels. I don’t know why this seemed like a good idea. All it succeeds in doing is making you replay old levels to gain points for an extra life or forcing you to start the game again from the beginning. Either way it’s a small mistake that causes a big problem.

Still as I’m sure you’ve guessed I really do like how this game plays. Shooting Blocks is nice to get lost in and leaves you with a satisfying feeling of calm, which is in part due to the music and graphics of the game.

Oh yeah about that, geez I almost forgot. The graphics in the game are pretty. Not beautiful or astounding, but pretty. It’s not a bad thing in this case. The lack of detail in the backgrounds and the crispness of the blocks in the foreground leave the presentation looking, well I’ll say it again, pretty.

To go along with this calm feeling of graphics we have some nice soft music to lose ourselves in as well. Tracks aren’t distinctly memorable, but then again the point of a casual game (or at least in my mind) is to be given some menial task to do while you zone out and give yourself a break.

So in the end the graphics and music in the game create an atmosphere that you can lose yourself. Then combine the simply satisfying gameplay and you’ll find yourself pleasantly lulled into a state of serenity, sadly though you’ll be woken from this state every so often when you run out of lives. Still the game is free to begin with so it’s not as if you would lose money on it. So why not go ahead and give it a shot?