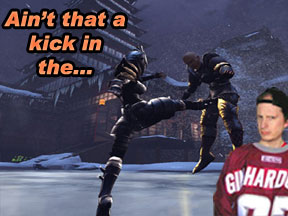 (also known as another column on hate)

As a huge Washington Capitals fan, I should be in the middle of unleashing the fury, especially after they beat the New York Rangers in the first round of the Stanley Cup playoffs. Finally I did not have to see another 3-1 series lead blown and end up in another depression. But despite this, I will be following up on what Chella did with her last column. For those who didn’t read it yet, go to it right here as long as you put your shields up first.

While I agree with everything she said, especially when you consider that Electronic Arts makes every game they produce now a "Limited Edition," I have come up with my own list of 11 additional hates that I have in this industry.

Oh, World of Warcraft, if you only knew what a Pandora’s Box you would have created. It seems every other game that comes out has to be an MMORPG. While I am glad to see that there are more MMOs coming out that are free to play, the vast number of MMOs that come out is just astounding. How many times would we be sent out to kill 10 tunnel rats and return for a small reward before we all get bored and move on? I’ve been there. I tried MMOs, I moved on. Next game please.

Madden 10, Dead Space 2, Assassin’s Creed 2 (and Brotherhood,) L.A. Noire, and Mortal Kombat. What do all of these games have in common? That’s right, they have advertising that blatantly lists them as only on PlayStation 3! Just because they get some extra DLC or something does NOT mean the game is a console exclusive. This is misleading advertising at its worst and I’m surprised no one has brought this up for complaint yet. At least put a footnote saying "also available for Xbox 360 and PC" or something similar to it.

And before I get slurs of "M$ fanboy" sent my way. Microsoft is guilty of it as well with Homefront and Call of Duty, but it is at a much smaller scale than what Sony is doing.

3. BUTCHERING OF CLASSIC FRANCHISES TO FIT THE CURRENT GENERATION!

Maybe I should use the term "re-imagining" for this one. Seeing many of my most beloved franchises completely destroyed with new mechanics, new story, new everything. Metroid Other M did exactly that. The Prime trilogy thankfully did not. Bionic Commando killed a 20 year legacy by making the person you rescued in the first game the bad guy all along. And now we have XCOM (In Name Only) changed into a first person shooter. I don’t even want to think of how all the strategy elements of the PC classic being taken out, as well as finding out where the aliens came from and how to stop them. None of this appears to be evident in the remake!

Any game publisher other than Activision: Oh crap! Another Call of Duty game is coming out this fall. We won’t be able to make a ton of sales as a result. What will we do?

We already know the answer to that, push the game to Q1 of the following year and reap the profits from a usually slow time of year. And then all the games planned for that time frame get pushed back to summer or late fall, and then the Call of Duty-phobia cycle starts anew. Grow a pair if you’re going to commit on a release date! Believe it or not, not everyone plays Call of Duty!

If anyone wants to wonder why I don’t play games online with my headset, this is the prime reason. And even without wearing the headset I still have to listen to this crap on my sound system. Chat rooms aren’t any better, as I found out when I got on a Mortal Kombat room and all I saw was a repeated message from a loser named SniperWolf326 saying "I HATE (racial slur.) And no matter if you report activity like this, nothing really gets done.

Thankfully there are people who are fighting back in their own way. Kelly has already mentioned her actions being a member of the GamerChiX, and websites such as www.fatuglyorslutty.com are exposing these harassers as the juvenile trolls that they are, and giving us the chance to laugh at them!

Marvel Vs. Capcom 3 did the unthinkable. They ruined a tried and true control system that Capcom’s fighters were best known for in favor of something that would be deemed more accessible. Even worse, they added a Simple Mode that ended up turning the game into a button masher.

They didn’t stop there either. In a stroke of pure genius, Capcom didn’t even think of filtering the use of Simple Mode for online gameplay so that newbies can just hammer away a cheap victory. And people wonder why I traded the game in as quickly as I did…

That wasn’t the only reason I traded Marvel vs. Capcom 3 in as soon as I did. It was also the bare bones gameplay with a serious lack of features. Only 4 fighters to unlock as opposed to the mass amount that were found in its predecessor, ALL WHO WERE ON DISC? Once again it looks as if companies are trying to squeeze out more and more cash from us thanks to DLC, but making us suffer with an incompletely or bare bones game is unforgiveable.

This also brings back something that Chella mentioned about "Sticky Scenery" and how game companies are now looking at DLC patches to fix their problems. Do we really want to sit through an incomplete game until the final patches are released? After all that’s what I’m doing with NASCAR 2011, and I really hope they get them out soon! (The latest I heard it went to Activision for final testing, so the sooner the better!)

I might not buy games used, but I do rent a lot of them from Gamefly, and companies such as EA, THQ and now Warner Bros. Entertainment are ruining the experience for renters by requiring a code to go online. If you don’t have the code, that’s fine. Just pay them an additional $10 and you will be able to play online. The greed in this industry is just unbelievable!

Seriously, how many people out there are buying 3D televisions? If it’s not the price that is holding them back, it’s being forced to wear proprietary eyeglasses that is, not to mention the headaches and eyestrain they will eventually suffer. Why must games start force feeding us 3D as well?
And what of the 3DS you ask me? You don’t need glasses to play it? Well that is true, but good luck trying to keep your eyes centered directly onto the screen and not end up cross-eyed after you’re done playing!

Need I say any more?

11. CORPORATE RUINATION OF WHAT COULD HAVE BEEN A GREAT FAN REMAKE!

Thanks Sega, as if you didn’t tick me off enough already. Selling out all the Dreamcast faithful? Canceling Shenmue II a week before release? 3D Sonics from Hell? Golden Axe: Beast Rider? Dropping the banhammer on Border Games’ excellent Streets of Rage Remake was the final straw. You better at least be considering it for a release on XBLA or PSN because if not it just proves you don’t care about gamers at all.
I know I ranted about this in my last column, and in a recent GiN Lounge, but I am still furious over this matter, and knowing Sega they already have a remake that would be NOTHING like the original. Full 3-D, butchered soundtrack that doesn’t sound anything like the original (a la Turtles in Time Reshelled) and a butchered control system made too complicated for its own good. Sorry to see that Border Games beat you to something good. Hurt much?

If only all of these issues could be resolved in a timely and professional manner. But you know the truth? I don’t think they ever will…