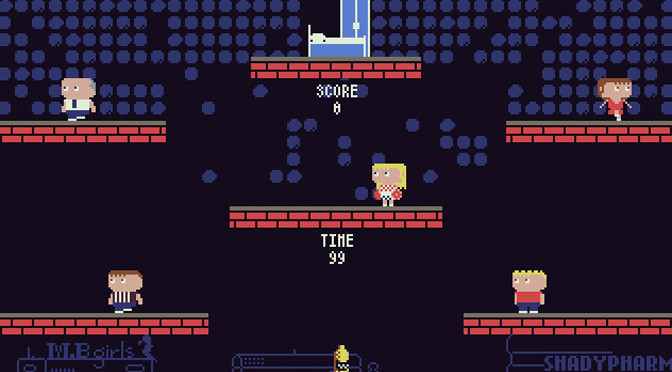 This week I spent my time with a small browser game called Beardgrow. It’s a platformer that was made for Ludum Dare 34.

The idea behind Beardgrow is that you’re a boy in Jr. High that wants to go to prom with your crush. Unfortunately for you, she’s only into manly men and you don’t even have a bit of peach fuzz on your face. You immediately decide to solve this problem by becoming more manly and growing a beard.

To speed grow our beard before prom, our little friend will need the help of some stereotypical manly items and drugs. He’ll have to collect as many swimsuit magazines, beers and hair growth hormones as he can in 99 seconds.

Beardgrow only has a single level and its set up like the original Mario Bros. This means that there are different levels with platforms on them. The top level contains the kid’s bedroom. He has to bring any of the manly items he’s found back here to help him grow his beard. However, he can only carry one at a time. The items he needs spawn on the very bottom level.

There are also obstacles along the way in Beardgrow. The bottom two platforms contain bullies that will beat the player up. There’s no health to be lost, but the beatings will take up time, which hurts how many items the player can collect. The next platform up contains a cheerleader that will insult the player’s masculinity. This results in a lost point and a reduction in beard size. The final platforms before the bedroom have the parents of the kid. The dad will take the item for himself and the mom will just plain throw it away.

Running around and collecting items in Beardgrow isn’t as easy at it may seem. This is because of the game’s controls. Our beardless protagonist is constantly running because he’s frantic about trying to grow out his beard. The player has to hit the C key to change direction and the Up Arrow key makes him jump.  The controls are a little strange to get used to, but aren’t bad once learned.

One thing about Beardgrow that’s interesting are the multiple endings. These change depending on the beard that our little hero has grown. Not all of them are happy, but most of them are at least humorous.

The graphics in Beardgrow are simple. There’s not a whole lot of animations to be found and there’s only a simple background to the game. I understand that this is a game for Ludum Dare, but we’ve seen better in this department from other games that have been entered in the contest.

The audio in Beardgrow is also a little underwhelming. There are basic sound effects and a single song that loops in the background.  This works for what the game is. However, a little more would have also been nice.

Overall, Beardgrow isn’t the best Ludum Dare game I’ve ever reviewed her at GiN. Its concept is simple and funny, but so are its graphics, gameplay and audio. I don’t think I’d blame anybody for not spending their free time with this game.

Beardgrow earns 2 GiN Gems out of 5.